Budget 2021: What works for startups, and what doesn’t? Labor’s Ed Husic and tech leaders react

Shadow Minister for Industry and Innovation Ed Husic has joined startup leaders in responding to last night’s federal budget, with a general emerging consensus suggesting measures to boost the tech ecosystem are welcome, but could go further.

In an initial statement ahead of Labor’s broader response, Husic said he welcomed the investment into Australia’s AI capabilities, noting this is something he has been calling for “for a long time”.

However, he added he would reserve his judgement on the scheme until more information is available.

“While it’s good to see this government finally join the party, the devil is always in the detail,” he said.

Husic also noted that considerably more could have been done in terms of investment in tech, and pointed to Singapore’s IT expenditure in 2020, which reached $3.5 billion.

By contrast, the government’s flagship digital economy plan is worth $1.2 billion, including the AI strategy and investment in digital skills and infrastructure.

If Australia is to compete with its neighbours, “we need a far bigger commitment”, he said.

Husic also took the opportunity to point out the Morrison government isn’t one with a particularly good track record in terms of either tech investment or tech deployment.

The COVIDSafe app, for example, “was executed so poorly, plagued with flaws and roundly rejected”, he noted. And the government engaged an overseas company to build it.

“Scott Morrison has previously said he wants Australia to be the best at adopting technology from overseas,” Husic said.

“We need to recognise the potential Australia has to create and innovate in these spaces,” he added.

“We need to develop our tech and innovations sectors here. We have smart people in this country that are doing great work and need to be celebrated, and more importantly, supported.”

Offering less of a partisan viewpoint, FinTech Australia chief Rebecca Schot-Guppy notes that there were not too many surprises for the tech sector — we already knew the $1.2 billion digital economy plan was coming, as well as the review into VC tax incentives and changes to employee share schemes.

Still, she says the $42.4 million over seven years for STEM scholarships for women, and changes to talent visas were “pleasant additions”.

But there were areas in which the budget measures could have gone further.

For example, the digital economy plan posed an opportunity for the government to implement more of the recommendations from the Senate enquiry into fintech and regtech — perhaps most notably, changes to the R&D Tax Incentive Scheme as it relates to software startups.

“Given the other tax breaks on offer for other industries, further schemes that favour startups and emerging companies shouldn’t be off the table,” she said. 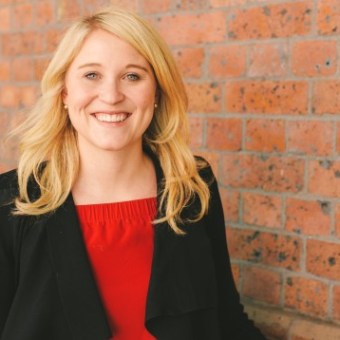 Rebecca Schot-Guppy is the chief executive officer at FinTech Australia.

Schot-Guppy also welcomed the government’s patent box tax incentive scheme, but noted that it benefits a relatively slim part of the tech sector.

The scheme offers a lower 17% tax rate for all profits relating to medical and biotech patents that are developed and owned in Australia. The government said it will consult on whether the scheme could be extended to cover clean technology, but there were scant details on this, and no time frame.

Schot-Guppy would like to see this scheme rolled out to other parts of the tech sector “sooner rather than later”, she said.

“But it needs to think outside of the box, and broaden this policy,” he said.

Many other sectors — such as fintech — could benefit from this, and it could have a measurable impact on the economy.

“Continued interactions through digital-first innovation will be key to our shared future, no matter how challenging,” Dickinson said.

The tech her business builds is not likely to be patented, Gallaher notes.

“This is despite it having the potential to make hundreds of millions of dollars and to drive billions in value for the clinical trials sector.”

Even within the life-sciences sector, the patent box doesn’t exactly have a broad reach.

“Software, apps, AI and data approaches in life-sciences are burgeoning and are equally as experimental and of significant value, but don’t necessarily rely on patents,” she says.

Budget 2021: No change to the RDTI, but some bright spots for startups

This budget isn’t jam-packed with measures specifically giving startups a leg-up, but investment in the periphery is a positive step forward.

Plus exclusiveGo deeper: How SMEs can strategically read the federal budget

Just one hidden insight used well could give you a competitive edge over the rest.