Owners and operators of pubs and bars across Australia are banding together and showing support for 55 workers who lost their jobs at Carlton & United Breweries (CUB) in June.

As reported by Fairfax, the maintenance workers, who were a mix of electricians and fitters, lost their jobs after CUB terminated a machine maintenance contract with employer Quant.

The workers were then offered their jobs back again under a Programmer, a different employer. However the Australian Manufacturing Workers Union claims that the pay offered is 65% lower after penalty rates and other entitlements, than the original pay for the positions.

This has led to outrage across the manufacturing sector, and the workers have been protesting outside the company’s Abbotsford brewery in Melbourne for the past month.

However, a spokesperson for CUB told SmartCompany the workers were given notice of the end of the contract and  “it is not clear how the unions are calculating claims of a 65% cut in pay”.

“With any change of contract, we understand our commercial decisions can impact people and their families, that’s why we gave six months’ notice of the end of the contract and those people were paid redundancies by their employer.”

In support of these workers a number of pubs across the country have boycotted selling CUB-produced beers. This includes beers such as Carlton Draught, Crown Lager, and the most popular beer in Australia, Victoria Bitter.

One of these pubs is the Queensland-based Grand Hotel Yamanto, which took to Facebook on Saturday to show its support for the sacked workers.

“We have currently taken Victoria Bitter Australia off our taps and won’t be selling any CUB products across our bars to show our support for the 55 workers that were sacked. Could you survive on 65% of the wage you’ll receive this week?” said the business.

Michael Falvey, administrator for the Grand Hotel Yamanto and whose parents own the pub, told SmartCompany that this sign of support isn’t “a political statement, and it isn’t about being pro or anti unions.”

“If you got sacked for the job you were doing competently, could you survive on 65 percent of your previous wage?” he says.

Taking the beers off tap has been mostly supported by patrons of the pub, says Falvey, but he notes that there are a few upset customers.

“When you take the number one beer off tap, there’s always someone who’s going to be upset. Most people have been good about it, and they all agree that what’s happening is wrong.”

Falvey would like to see more pubs get behind the boycott, but recognises that its simply not possible for many business owners.

“We’re a pub with a XXXX contract, so we have the ability to take beers like VB off tap. Some places are contracted, and despite how strongly they feel, they still have staff to pay,” Michael says.

“It’d be foolish to say that we’re doing this forever, but it is for an indefinite period of time.”

Other pubs have taken to Facebook to declare the boycott. This includes popular Melbourne bars The Lincoln and Kent Street Bar. 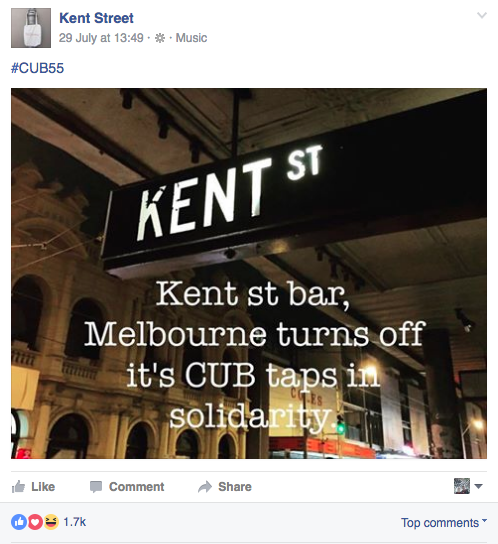 Many individual supporters of the workers have also taken to Facebook, using the business rating system to rate CUB one star, and express their support.

“Shame on you CUB! Sacking your loyal workers unceremoniously to bump an already healthy bottom line is a disgrace! I’ve got a full list of your products which I’ll now be boycotting until you re-instate the 55 workers,” said one commenter.

“Your treatment of your maintenance workers is disgraceful. I will not consume another CUB product until your sacked employees are treated fairly,” said another.

Some of these big companies are in deals paying wages that would blow your mind. I know places forklifts drivers are paid > $40 /hour day rate , this is to the employee, not the labour hire company. This comes from years of pressuring from union’s.

Its no wonder so many companies go through labour hire place to get control. The legal system here is against employers and they use the tools they can. I went to medium size firm I had not been in a few years and even they now have everyone via labour hire on the factory floor.

A decade ago on a very unionised site I know of electricians were getting far greater than >$110K ( not mining) , they were on 10-12 day rosters on and off. Most of these guys did a 2nd job somewhere else, plus the people on the breakdown crews, did only breakdowns and did foreign orders for themselves the rest of the time ( or played cards or read books). The one I met as they were used to doing breakdowns work, was quick but messy.

if the whole site had deals like this in all area’s, I am not surprised that site, is now closed.

The above is part of the reason things cost to much here. Its also an affront to the rest of us who just turn up and do normal jobs on normal wages.

Germany only has 25% and 50% overtime rates and you have to work your 38 hour week first before you get that unless the day is very long or on a Sunday or public holiday.

That’s Germany the most industrialized country in the world and it’s been that way for many decades. They were not stupid enough to push up house prices like us, so a house if half the cost to buy there for most than here. They have their cake and eat it.

A lot of Australians dont care if the nation lives on the “never never forever”, and are screwing over the rest of us.

So if the new jobs offered are between $70k-120k and that’s 65% reduction on their current wage, then that means they’re currently earning $200k – 342k. Holy Guacamole! I can understand why SAB (CUB) was interested in changing contracts. That’s highway robbery. Which contributes to what is very expensive beer.

Champagne lifestyle on a beer budget.

Mind you, if the average punter then starts drinking other brews than VB, they’ll discover what beer is supposed to taste like. Then they’ll do themselves out of a job altogether.

Clearly the workers aren’t getting $200k plus, which suggests to me that CUB is overstating the new contract pay. Also, if the staff are being made redundant, how can they be re employed to do the same or manifestly similar job at significantly less money?

I wouldn’t believe anything that the brewery says. Bear in mind the executives get multi million dollars salaries, and the wage worked out will be the HIGHEST of any particular worker, most likely supervisors. And the salaries quoted include 24 hour on call, with no call out fees or overtime paid to the workers. For example, Coles sacked ALL maintenance contracting companies, and then employed tradies at a $120,000 salary. This sounds VERY attractive until you realise that you have a basic 5 day week at 8 hours per day required to attend at all times. In addition, you have an area of around 5 stores where you are on call. Any breakdown in that area, and you will be called out and required to complete repairs. This will take (including travel to and from, and time to get equipment 3 to 11 or so hours. You then back up the next day. Special repairs are scheduled for no extra pay also. So your $120,000 includes 50 hours normal time, and an average of 20 to 30 hours UNPAID overtime. So if you were getting $30 per hour (low to average for a commercial tradie) you would have $1500 basic plus 20 hours at double time (an extra $1200) for a total of $2700 per week whereas $120,000 is $2,300. Good money, but you do nothing but work. CUB wants the work done BUT doesn’t want to pay for it. Just like ALL multinationals.

I am not sure that boycotting CUB will necessarily sure up the maintenance workers’ pay and conditions. Simple law of supply and demand. The less beer CUB sells, the less it has to pay salaries, and eventually everybody loses their job.

There is still the question about pay rates with the original contractor. Unions made it impossible for CUB to continue production of its main lines of beer in Victoria a long time ago with strategic strikes just before Easter, Christmas, or any other peak sales period. Extorting unrealistic wages and conditions simply makes it viable to change to another state, or even to an overseas production facility. Either way, what we are observing here is probably the beginning of the end of beer production in Victoria, and possibly Australia if the problem continues into the future. Thank the unions for putting people out of work.

Thanks for the CUB press release Colin.

By the way, if this action could be classed as a secondary boycott, wouldn’t that be illegal under the Trades Practices Act? Big fines if it is.