A meat display at a Woolworths store in Adelaide has sparked rage from vegetarians and vegans, who have labelled a handwritten sign “disrespectful”.

A customer took the company to task after seeing a message above the meat fridge at a Woolworths store in Glenelg that said: “What do you call a cow with no legs? Ground beef.” 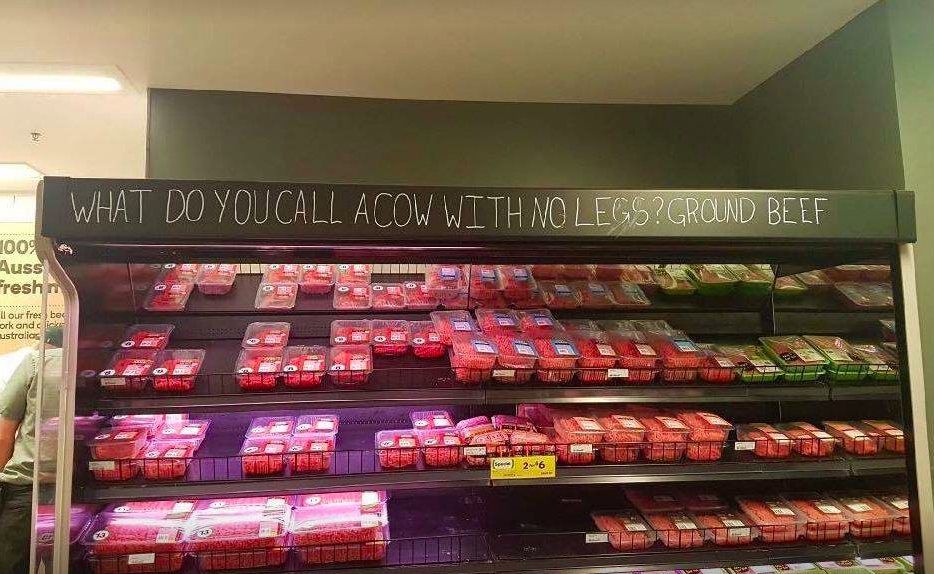 News.com.au reports customer Lindsay Millward first posted about the “insensitive bunch” at the store, which prompted vegetarians and vegans took to Facebook to fight it out with other shoppers who wanted to make their own meat jokes.

Woolworths said it was taking feedback on board and would never intentionally offend customers, reports news.com.au.

Fairfax reports workers at the Minto factory for Streets ice cream will today put an offer to the company’s multinational owner Unilever, as part of an enterprise agreement negotiation that has seen the Australian Manufacturing Workers Union launch a summer boycott of Streets products.

The union is said to be offering improved roster processes and retraining to save the company $2.5 million without having to renegotiate a new enterprise agreement.

Unilever has applied to have the current enterprise agreement terminated, which the AMWU says could result in a pay cut to workers of more than 40%.

Struggling US department store Sears will close another 63 stores across America, reports Inside Retail.

Forty five of these outlets are Kmart stores, and all are scheduled to shutter after Thanksgiving and Christmas sale seasons are completed.

In a statement, the company said the closures are part of a plan to reduce the number of overall stores to focus on those with the best chance of profitability.

Reuters reports the planned closures will bring Sears store numbers below the 1000 mark, down from 2019 that were in operation in 2012.