Is capitalism “under fire”? As public trust plummets, Aussies want business leaders to step up

Is capitalism “under fire”?

Yes, according to the folks over at multinational PR firm Edelman, who say people around the world are coming to question their prevailing political and economic realities amid heightened concern about our ability to deal with environmental crises.

Releasing its 20th annual trust and credibility index on Thursday, Edelman finds Australian consumers are looking for business leaders willing to “lead the charge” on social issues and those firms doing their bit to address climate change.

Drawing on the views of 1,150 Aussies and more than 30,000 others around the world — gathered through 30-minute online surveys last October and November — the research draws a picture of an Australian public worried about technology, the future of work and the spread of “false information”, with a prevailing view that the status quo is failing them.

Asked a range of questions about their confidence in “the system”, their desire for change and what “sense of injustice” they had, 56% of Aussie survey respondents said the system was failing them (up 4% on last year), while one-in-two agreed capitalism, as it exists today, is “doing more harm than good in the world”.

A total 72% of Australian respondents now say they have a lack of confidence in prevailing political and economic systems.

Edelman Australia chief executive Michelle Hutton said there has been a “severe breakdown in trust” among Australians over the last 12 months, with events such as the bushfire crisis and global issues such as climate change driving scepticism in large institutions.

“Australia’s informed public saw a severe breakdown of trust from the government in response to the recent bushfire catastrophes,” Hutton said in a statement circulated Thursday.

“This should have been an opportunity to unite the nation and build security but instead, the lack of empathy, authenticity and communications crushed trust across the country.

“Australians no longer feel in control. The new decade marks an opportunity for our institutions to step up, take action, and lead on key issues that will unite Australians and instil hope for the future.”

Edelman conducted a supplementary survey in Australia in the wake of the bushfire crisis dominating airwaves throughout January.

The re-take saw the trust index fall from a two-decade high of 68 points to 59 points among the so-called “informed public” — namely relatively rich university graduates aged between 25–64 who say they read the news.

Trust among the so-called “mass population” (in other words, everyone else) fell to 45 points. 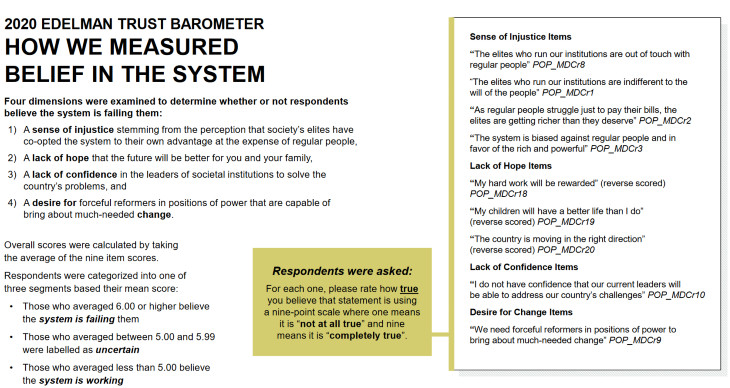 Despite the global survey identifying growing discontent with political and economic orthodoxy, Australian respondents overwhelmingly said they want businesses to do more in enriching their local communities.

The number of respondents who say chief executives should take the lead in bringing about social change grew to 78% in 2020, up 13% over the last two years.

A total 70% of Aussies agreed companies can chew gum and walk at the same time by increasing profits and improving conditions in the communities they operate in.

There’s plenty of angst built into the responses, which is probably to be expected given the tone of the surveys, and there’s certainly an element of selection bias in these results.

But the survey highlights a growing trend in recent years where consumers are increasingly looking for businesses to speak up about social issues, particularly as thorny problems such as climate change rise to the fore.

A whopping 86% of Aussie respondents to the most recent Edelman surveys said they expect company bosses to speak out on societal issues, while 89% said the environment was at the top of their list.

In a recent interview with SmartCompany, Fred Harrison, chief executive of Ritchies supermarkets, said executives could  — and even should be made to — do more to enrich their local communities.

“We seem to be focused on coming to the rescue in times of crisis, but how about we start putting some money aside and become winners by having people living in a far better society?

“Every business should be donating a percentage of their sales to a charitable organisation,” Harrison said.

NOW READ: Should a decline in trust of social media affect how small businesses use it?

NOW READ: What five social media platforms should your small business be using?