How to design behaviourally effective forms

How do you get people to complete a form?

It seems like a boring question, but the reality is we rely on customers, staff and suppliers to fill out paperwork. Failure to do so, or do so accurately, can result in expensive and demoralising follow-up and re-work.

REST Industry Super identified it had a problem with its forms, with only 57% of forms for group insurance claims completed on the first attempt. Working with its group insurer and re-insurer, REST was able to increase this rate to 87%.

What was their secret? Behavioural economics.

Speaking at the 2017 Group Insurance Summit in Sydney, the re-insurer’s claims rehabilitation specialist Nick Mingo ran through some of what they did, including making incomplete sections of the form more obvious, using plain language and making the form easier to action. Taking his cue, I thought I’d share with you some ideas about using behavioural techniques to design effective forms.

Through the work I do I have realised there are really only three reasons people don’t complete fordms; they can’t be bothered, they’re confused or they’re scared.

So with those three problems in mind, let’s look at what you can do to improve your rates of success.

How to reduce effort

The easier something is to think about, the easier it seems to do. That’s the lesson from studies on ‘processing fluency’, where people are more likely to do what you would like them to do if it feels like an easy decision.

For example, participants in a 2008 study by Song and Schwartz were asked to read a series of exercise instructions and estimate the time would take them. Unbeknownst to the participants, half the group received the instructions in easy to read Arial 12 point font, and half in difficult to read Script font. The result? Those in the easy to read group thought the exercise would take 8.2 minutes to complete, whereas those in the hard to read group thought it would take a whopping 15.1 minutes and reported being less likely to bother.

It’s not just the typeface that makes a difference, either. Colour contrast becomes important when designing your form because some text and background combinations inhibit fluency, reducing your rates of likely completion.

Greyed button makes it less likely to be clicked

So the first lesson when reducing effort is to be careful with your choice of typeface and colour scheme. The second lesson is to reduce the level of input you require from your customer. That means pre-populating as much as you can, but also eliminating unnecessary fields. Too many businesses get greedy when engaging their customers and take the opportunity to ask for ‘nice to know’ rather than critical information. Do you really need their surname or will first name do? Do you really need both business and mobile phone numbers? Is it vital you have their birth date?

Here’s an example of a convoluted and difficult feedback from an airline. My guess is they don’t really want feedback. 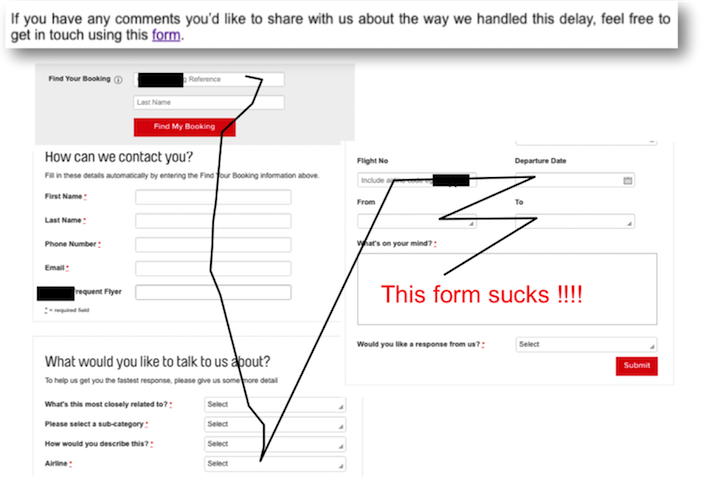 Feedback form requires too much of its customers

How to maximise reward

The only way you will get someone to bother completing a form is if there is something in it for them. In other words, you need to provide a “WIIFM” (what’s in it for me?) rationale in the lead up and even throughout the form.

Here’s an example of two newsletter sign-up forms. On the left is one I see all too often — there is no customer WIIFM, they refer to it from their point of view rather than the customer’s (“our newsletter”), they ask for “name” without explaining whether it’s first name, surname or both, and they ask for a postcode without explaining why. On the right is how I do it. Notice how I priortise what they get before asking for their email. They are asked for their first name and content preferences in a second step but by then they are clear on how they will be rewarded. Would I like their surname, business name and phone number? Sure, but that’s asking too much for this value exchange. 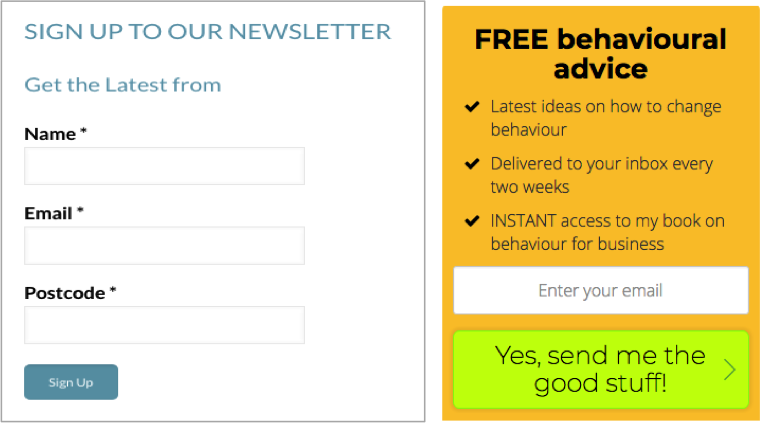 Other tips for maximising reward:

Good use of prompting reconsideration

How to reduce confusion

How choices are presented in your forms can make or break its effectiveness. Choice architecture refers to how options are communicated, and is an area you need to be careful about. As the REST representative stated, in some industries (like health, financial services and insurance) you need to be particularly wary of defaulting choices as it may imply recommendation.

For the rest of us we need to be careful because people are enormously influenced by choice defaults and sequencing. Structuring the choices too heavily in your favour (e.g. defaulting people into an up-sell they hadn’t expected) can undermine goodwill and make your customer feel they have been manipulated. I have seen airlines default customers into paying an extra $10 for seat selection — a risky strategy for customer relations.

By contrast, below is an example of a business using defaults and choice architecture to the customer’s benefit. They have defaulted the cheapest option but then included two other options. Note that express delivery is $19.99 but only two days faster than priority delivery, which is a whole $10 cheaper and only $2 more than standard. I would guess than many customers would upgrade to the priority option in this layout. 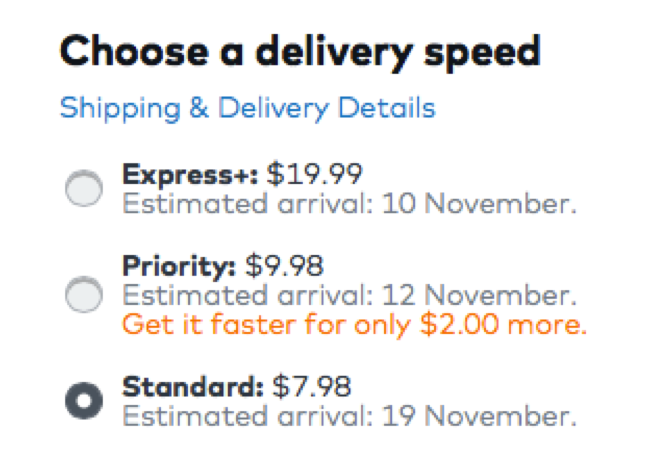 Clever defaulting and sequencing of options

How to reduce anxiety

People get form anxiety when they are asked difficult or sensitive questions, when the ramifications of submitting the form are significant, or when they don’t know what happens when they complete it.

This survey, for example, hits participants with potentially sensitive questions right off the bat, immediately placing the participant on the defensive.

Asking for sensitive information early on is risky

The two sales forms below may also inadvertently scare their customers. The example on the left asks for date of birth – a highly sensitive piece of information and an unnecessary request for most transactions (and particularly when buying shoes). The example on the right requests an email address from their customer without explaining why. You can ask for an email but let your customer know what they get from providing it – something like “so we can send you a confirmation” would make all the difference.

Asking for sensitive information without reason is a no-no

Other tips to reduce form anxiety:

As you can tell, a lot of thinking goes into an effective form and we’ve only scratched the surface. While many of the points I’ve raised apply more readily to online forms, paper-based forms can be likewise enhanced. Approaching your task with the three problem states in mind – they can’t be bothered, they’re confused or they’re scared – should guide you toward a more effective outcome.