The truth about being a young leader? The self-perceived barriers are invisible to others 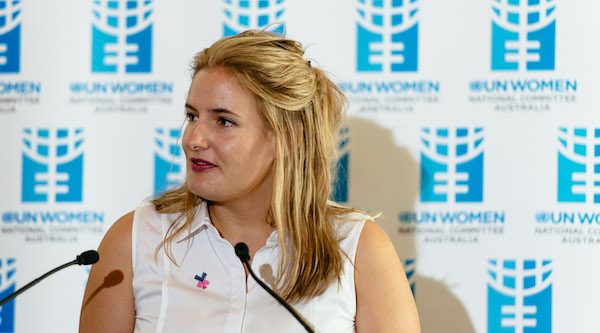 When Elizabeth Shaw was tapped on the shoulder to become the next president of UN Women’s Australian National Committee, she never thought she’d be qualified or experienced enough for the role.

It is, she says, amazing the limitations we can sometimes put on ourselves. The barriers we place in front of the roles and jobs we want are often only self-perceived and invisible to others.

“I hadn’t even considered that I could be the president because in my mind, the President was an older, more experienced woman who had a long, distinguished career and brought gravitas and wisdom beyond my wildest contemplation,” she says.

Elizabeth became the youngest women to hold the president position and the first West Australian. She’s also managed her seven years on the UN Women board alongside a full time job in KPMG’s management consulting practice.

As she finishes up her time in the role this week, she says she’s much more confident than when she started out.

We caught up with Elizabeth to ask her thoughts on gender equality progress, how to balance a full-time career with a massive board gig, and learn her advice to other women seeking their first board role.

Has it been a good seven years for gender equality? What’s changed?

Over the last seven years, we have seen an increased level of commitment and resources dedicated to accelerating progress towards gender equality, and a growing sophistication in evaluating what programs and interventions actually work.

We are becoming less siloed in our thinking, with wider recognition that to tackle the lack of women in leadership positions, we also need to look at things like gender stereotypes, unpaid care and domestic responsibilities, tax incentives and the prevalence of domestic and family violence.

We have seen the movement continue to broaden, with more good men stepping up alongside good women to advocate for gender equality, and organisations recognising the significant role they play as employers on issues like women in leadership, the gender pay gap and domestic and family violence.

Internationally, the global community is focused on addressing significant challenges such as poverty, inequality and sustainable development, as part of an ambitious global agenda reflected in the UN’s Sustainable Development Goals (SDGs), which recognise gender equality as a pre-condition for their attainment.

UN Women has been working in close to 100 countries around the world to make gender equality a lived reality, through both grassroots program delivery (such as by training female political candidates, programs that challenge gender stereotypes and services to women experiencing violence) and high-level global policy setting and advocacy to governments.

But there is still a long way to go.

Globally, violence against women is still endemic. Women are not represented in the highest levels of decision-making in significant numbers in the majority of our organisations and institutions. And women’s economic security is far from assured in almost every country, whether it be driven by unfavourable or discriminatory work conditions, unpaid care and domestic responsibilities, or persistent gender wage gaps.

What was it like being the youngest female president of UN Women?

Firstly, I reflect on the fact I didn’t seek out the role of president – I was tapped on the shoulder after serving on the board for four years. I hadn’t even considered that I could be the president because in my mind, the president was an older, more experienced woman who had a long, distinguished career and brought gravitas and wisdom beyond my wildest contemplation! It is amazing the limitations we put on ourselves, and also the barriers we presume might be there, particularly if we haven’t seen someone like ourselves inhabit the role. I am grateful that our board challenged my thinking on this and encouraged me at every step. I look back on my first year as president and remember feeling much less confident that I do now.

I rigorously prepared for every meeting, carefully reviewing every agenda item, and ensured I was really clear on where each discussion needed to land and what the staff needed from the board. I imagined contentious issues, who would say what and what strategies I could use to lead the Board in the right direction.

All of this was incredibly useful at the time because it helped me build confidence in the role. And because of all this preparation, I do much of this intuitively now.

If my first year was characterised by feeling under-confident, the second year was about consolidation and the third year has been about making the role my own. I’ve found the comfort to work in a way that reflects my personality and values. I love to make board meetings fun and create an environment where everyone feels heard, valued and included and enjoys the time we spend together. Setting up a social dinner the night before the board meeting has created a brilliant group dynamic.

I am lucky to have had a board that has supported, championed and challenged me. It has been one of the great honours of my life serving alongside a group of fiercely intelligent, strong, opinionated and supportive women!

How do you balance a full-time role with a board position?

It’s not always easy, but the best thing about my role as president and my work with KPMG is that they strongly complement each other.

KPMG is really focused on continuing to increase the number of women in leadership roles and playing our part in advancing important social causes. I’m lucky that my boss is a personal champion of gender equality and is always focused on “making a difference”! I have no doubt that the strategic discussions, complex decision making and representational duties I undertake as President also make me better at my job.

Undertaking a national role from Perth has its challenges. I have become very good at making productive use of flight time (the occasional weepy Nicholas Sparks movie aside). I plan most board meetings somewhere above the Nullarbor desert on the back of aeroplane sick bags. One notable meeting, I discovered the sick bag I had been using was not in fact empty…

The time difference between Perth and the east coast means I can fit in a lot of phone calls and teleconferences before work, which is handy. It’s all about finding ways and means that work, even if I live in fear of accidentally pressing FaceTime and revealing the fact I am wearing pyjamas during many important calls.

Any advice for other women seeking their first board position?

I am a huge advocate for women putting their hands up for board roles. My own personal experience has been characterised by incredible learning, intellectual stimulation, fun, friendship, and connection to community.

It can be hard to get the first board role – but everyone gets their start somewhere, so don’t be discouraged by any early setbacks and keep at it!

Rather than worrying that you don’t have board experience, I would encourage women to consider what experience they do have that can be leveraged in a board role, such as a legal background, strategy experience, governance skills or strong networks – and make sure to position that strongly in applications!

In non-profit organisations, you can also find a pathway to the Board through volunteer work, which is how I got involved with UN Women. When we consider candidates for the UN Women board, in addition to experience, we also look at what evidence there is of a candidate’s support for our work. Are they a donor or a volunteer? Have they come to any events?

It also helps if you can build networks within the organisation, to help you understand where the organisation is at, what they are struggling with, and how you can help.