How to seal any business deal: Four critical skills for success

When it comes to business, a prerequisite for success is staying calm in front of others even when your surroundings might be more chaotic than you’d like.

This sense of calm is all the more important if you’re looking to seal an important business deal.

No matter the size of the agreement you’re trying to get across the line, when it comes to the pitch or negotiation, being prepared for any circumstance is key.

This is something serial entrepreneur and Digivizer founder Emma Lo Russo found out when she once had to prepare for a request for proposal meeting via Skype — while on annual leave in Santorini.

“I arrived at Santorini late at night, walked around to find the best spot and then got up early and tested my Wi-Fi,” she says.

“I had it all set up, but right when i started my connection [for the pitch meeting], they started walking the donkeys past.”

A parade of animals now in the background of her Skype shot, Lo Russo had to keep composure.

“Hundreds and hundreds of donkeys with their bells were just walking behind me. I had to lift my camera up, you know, and say, ‘look at this for commitment’.”

Having humour and the ability to roll with any circumstance in the quest to get a deal done is important, but Lo Russo says it’s equally critical you make the terms of any business pitch crystal clear.

Across the country, hundreds of entrepreneurs wake up each morning to desks full of pitch decks and presentations for potential partnerships.

But business founders tell SmartCompany that no matter how prepared you are, sealing a deal is about much more than the initial idea you put on the table. Here are four key qualities needed to get a business deal done, based on the experiences of those at the coal face.

Today, Vinomofo is an international business backed by millions of dollars in funding, but co-founder Justin Dry recalls how much hard work was needed to get the wine startup’s first supplier deal across the line.

When Vinomofo approached that first supplier in hopes of securing a deal to sell their wine through the platform, the founders didn’t have a traditional story of a strong track record to rely on, Dry says.

“That was interesting, because we were asking producers to sell their wines for less than they had sold them before, through a company who was hopefully going to sell some, but wasn’t sure,” Dry tells SmartCompany.

Dry and co-founder Andre Eikmeier had a list of subscribers and were “excited” by the idea, but beyond that, they didn’t have examples upon which they could seal the deal.

“That’s not how we pitched it, though,” Dry says.

Instead, the ability to get the first wine suppliers on board came down to the serious legwork Dry and Eikmeier had done in the past to engage the wine community.

This includes the years spent telling the stories of Australian wine through their online web series, with Dry reflecting that in order to secure deals early on in the game, founders have to show they are contributing to the space they are working in.

It may have come down to winemakers “taking a leap of faith” by putting their wares on the Vinomofo platform, but it was one that was backed up by experience of the founders.

“It’s about entering relationships where it’s not just one sided. We did a lot of moving forward of the industry in terms of content, digital, telling the story to a younger generation,” he says. 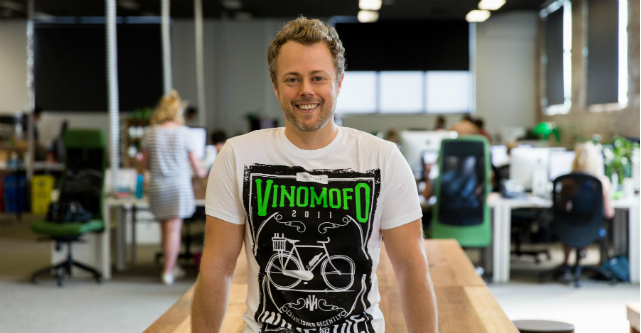 Be specific about your offer — and what you get in return

For Emma Lo Russo, the first deal she sought to secure for her social analytics technology startup Digivizer was with a big corporate entity. Her approach was to “act as if we were a mature, established company that can serve them”.

While the approach of “selling forward and then deliver” worked for the business, Lo Russo says that for early stage companies in particular, it’s worth thinking about the time a new business deal will take to deliver once it’s been sealed.

When dealing with bigger companies, the actual process of securing a deal and then carrying out a project can be incredibly time consuming, so Lo Russo recommends weighing up whether a deal is appropriate for you at this stage in your business before making a pitch.

“Allow for the fact that the bigger the customer, the more they will want from you,” she says.

Be confident enough to re-evaluate

It’s also important to develop the confidence needed to reevaluate agreements once you’ve entered into them, says Dry.

In 2012, the Vinomofo team sold a stake in the business to retailer Catch of the Day in the name of expanding their networks.

Dry says the deal was a big win for the business at the time, given it was looking to scale to a bigger network of customers.

“We had to scale quite quickly in order to be a feasible competitor,” he says.

However, a year later, after reviewing sales numbers, the Vinomofo team had to make another decision.

The initial conversation about partnering with Catch of the Day was intimidating, but Dry says making the offer for Vinomofo to buy back the stake required perhaps even more confidence.

“We chatted to [Catch co-founder] Gabby [Leibovich], sheepishly, not knowing how he would react – assuming the best, preparing for the worst,” he says.

Dry says the two groups parted ways on friendly terms, with an understanding of why the Vinomofo founders would want to own a full stake again.

The takeaway, however, is that confidence in negotiating comes with understanding what your business wants and needs, and being able to articulate that clearly.

“It was about knowing where we sat, what they would want, and understanding where it could go. Then, I guess, going in with confidence and saying, ‘here’s what we’re thinking, what do you want?’” Dry says.

Be persistent and prepared to ask questions

It doesn’t matter what sector you’re in, deal making is a moveable feast.

It’s a process that requires persistence and a willingness to ask questions, says Gautum Mishra, founder of “Spotify for news” startup Inkl.

When the business finally landed a licensing deal with The Guardian for its news content, Mishra says he was well acquainted with the word “no”.

“Hearing the word ‘no’ from prospective partners had prepared me for that moment,” he says of that deal.

Having pitched to several publications for potential licensing agreements, Mishra says he has learned a lot about how deal making is an ongoing process.

“First, the realisation that in most cases (in the business world) ‘no’ means ‘not right now’; instead of being dejected I kept going back. Second, the best way to respond to a ‘no’ is by asking, ‘why not?” he says.

Having the foresight to ask for feedback about why a pitch wasn’t successful has been invaluable when it comes to brokering new deals, he says.

“Every answer I got to that question helped me pre-empt a future ‘no’, thereby making it easier for people to say ‘yes’,” Mishra says.

The more feedback you get on why a pitch wasn’t successful, the more easily a business can understand the problem “that the person opposite you needs solved”, he says.

This experience has paid off for the startup, which also recently landed a long-pursued deal with the Wall Street Journal.