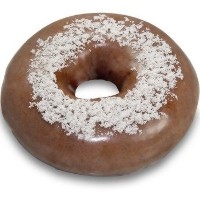 The opening of Adelaide’s first Krispy Kreme store has resulted in frenzied scenes.

There have been long queues for the donuts with some super keen customers camping overnight.

Police have been called to the store 13 times, including once to intervene in a knifepoint robbery.

Two teenage boys bought six boxes of doughnuts from Krispy Kreme when a man approached them and threatened them “with what looked like a knife”.

According to the police report, he demanded the teens remain in the car and stole the 72 donuts before running off.

There has also been a brawl between queuing customers.

Parking rules have gone by the wayside with 145 parking fines issued in the area by the local council and $21,000 worth of fines imposed.

Krispy Kreme Adelaide is delighted with the publicity and has offered a box of donuts for everyone who gets a parking fine.

“Part of it is because Australia has had Krispy Kreme in Sydney and Melbourne for quite a while and Adelaide felt like the poor cousin,” he says.

“When it finally happened after a long period of waiting there was already a relatively high awareness.”

Higginbottom says Krispy Kreme Australia is a separate franchise to the Adelaide business which negotiated to buy the rights to South Australia.

According to Higginbottom media reports of brawls between hungry customers have been blown out of proportion.

“We haven’t seen any brawls but we did have some drunk people who were removed by police and whether it had anything to do with Krispy Kreme donuts is a whole other story,” he says.

Higginbottom says it is “unfortunate” the council cannot be more lenient in its policing of parking in the area so Krispy Kreme is happy to give a box of donuts to those with a fine “to help take the edge off it”.

“We can’t take the fine away but we can give it a happy ending,” he says.

“A box of donuts is $20 and a parking fine is up to $200, so I certainly hope not.  I don’t think most people would deliberately park illegally.”