A photo of a Michel's Patisserie cake taken by an RFG franchisee. Source: supplied.

Former Michel’s Patisserie store owner Robert Verni never signed up to be a delivery driver, but after Retail Food Group started forcing him to decorate frozen cakes he and other franchisees felt they had no choice.

Shortages across Michel’s store network were forcing franchisees to drive hundreds of kilometres just to make sure they could fulfil orders for birthday and wedding cakes.

“I was travelling from the Gold Coast to Brisbane just to grab cakes,” Mr Verni told The New Daily. “Our costs went through the roof.”

Verni is one of 130 former and current franchisees that filed a class action against Michel’s Patisserie owner Retail Food Group (RFG) on Tuesday, alleging the company sent its store owners to the wall under cost-cutting measures that forced them to sell “disgusting” frozen foods.

The multimillion-dollar lawsuit alleges RFG deceived its franchisees about changes in 2015, promising that a shift from daily deliveries of fresh food to twice-weekly packages of frozen goods would save money.

Franchisees claim the opposite happened.

They say food quality plummeted. And as customer complaints piled up, store owners like Verni started handing out more money in refunds than they were making from selling frozen cakes.

Delivery delays and misused marketing funds made things even worse.

“The [cakes] were coming in disgusting,” Verni said. “We had hair on some of them.

“The frozen model destroyed the brand and our reputation.” 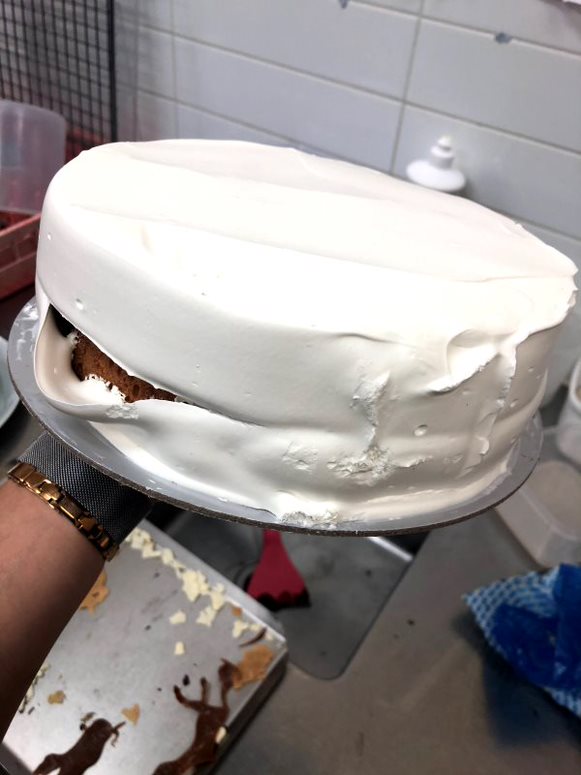 A photo of a Michel’s Patisserie cake, taken by a RFG franchisee. Source: supplied.

Franchisees ‘left with absolutely nothing’

Franchisees will claim RFG broke not only consumer laws, but its own contracts with franchisees and the legally binding franchising code of conduct between 2013 and 2017.

Federal court filings seen by The New Daily allege RFG’s conduct was “unreasonable, arbitrary [and showed] a capricious disregard of the interests of franchisees” when it began forcing them to sell defrosted food.

The class action alleges the changes required franchisees to invest in new freezers and more staff, even as their stores were crumbling under the weight of angry customers and plummeting sales.

Franchisees also claim RFG misled new franchisees by failing to tell them that their stores would be unprofitable under the new model.

If successful, the class action could deliver millions of dollars worth of damages for business owners, many of whom lost their life savings after their Michel’s Patisserie businesses went under after the changes.

Verni lost more than $1 million — including his family home — after his store became insolvent.

His family still has a debt tied to the business, which has taken its toll on his elderly parents.

“We had to find every dollar we could to pay all our staff. I was taking money out of our kids’ bank accounts and our life savings,” he said.

“We now have two elderly people who had a beautiful home, worked in Australia for 60 years, put their life on the line for their children and this business to be left with absolutely nothing but a debt on this business.”

The class action is the latest attempt to bring RFG, one of Australia’s largest food companies, to justice for the way it has treated franchisees.

That culminated in an ongoing ACCC prosecution of RFG, which alleges that the company misled franchisees and misused marketing money.

Michael Fraser, co-founder of advocacy firm Operation Redress, said the road to genuine accountability at RFG has been a decade in the making.

“This is a great day for franchisees. We’ve been hearing the horrible stories for years,” Mr Fraser told The New Daily about the class action.

“If this class action settles and franchisees get some money, it will give franchisees some comfort that the company was held accountable.”

For its part, RFG denied the franchisee allegations on Tuesday and said it will defend the case, setting the stage for another federal court battle.

“The proceedings … relate to the historical conduct and operation of the Michel’s Patisserie brand system under former RFG leadership,” it said.

“RFG is currently reviewing the allegations made in the proceedings.”

RFG’s share price fell 4.71 per cent to 8.1 cents on Tuesday. Before the first set of allegations emerged, its share price was $4.48.

Retail Food Group's share price soared on Tuesday after it told investors ASIC had concluded an investigation and would not pursue enforcement action.