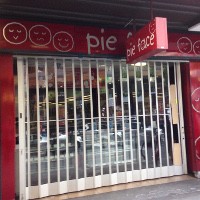 A Pie Face store on Flinders Lane, Melbourne has put up its shutters

Twenty Pie Face stores are in the process of closing their doors for the final time, just one week after the pie franchise collapsed into voluntary administration.

Arnautovic said another eight company-owned stores in New South Wales will close, along with three in Queensland and one in Western Australia. Two franchised stores have also been closed. Approximately 130 part-time employees will lose their jobs as a result of the closures.

The Pie Face store on Flinders Lane in Melbourne’s CBD shut its doors on Thursday afternoon and did not open again this morning. Phone calls to the store this morning went unanswered.

READ MORE: When franchisors go bust: 10 risks to franchisees in cases such as Pie Face

Jirsch Sutherland has previously indicated the source of Pie Face’s troubles is the group of 29 company-owned stores in the network, and Pie Face itself said last week it will seek to restructure the business to focus on its franchise and wholesale business. At the time of entering administration, there were 70 Pie Face stores in Australia, 43 of which are franchised.

While Arnautovic says it is “unknown at this stage” if there will be any further store closures, he says “the balance of company-owned stores will likely continue if the group’s restructure is approved by the group’s creditors”.

A meeting of Pie Face franchisees, management and administrators is expected to take place next week.

While the company’s investors and at least one franchisee have said they believe the chain will survive the administration process, franchising expert Howard Bellin told SmartCompany yesterday he has serious “doubts” about the ability of the company to “stand the test of time”.