Why Eagle Boys decided to give away 646kgs of potato 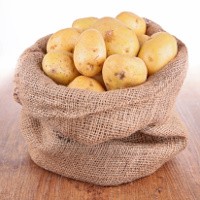 A larger number of Australians will be enjoying food from Eagle Boys this winter, but they won’t necessarily be feasting on pizza.

In the past month, the well-known pizza chain has donated 646kgs of sweet potato to OzHarvest, a charity which distributes food to people in need across the country.

The potato will be used to make more than 20,000 bowls of soup for individuals in New South Wales, Queensland and Victoria.

While businesses that have a social purpose are becoming more popular with Aussie consumers, Eagle Boys national marketing manager Ellen Gault told SmartCompany the donation came about because of changes to the pizza chain’s menu which resulted in large amounts of excess stock.

“We were looking at different ways to rid of the surplus stock,” says Gault. “We had quite a lot of stock in a small number of locations and it would have been too expensive to get it out to all of our stores.”

“So we began looking info different charities and found that OzHarvest supply food to a huge variety of charities,” says Gault. “We wanted to help as many people as possible and this is something they specialise in.”

OzHarvest was founded in 2004 by Ronni Kahn, who was inspired to establish the food rescue charity after witnessing the amount of food wasted in the hospitality industry.

The charity collects thousands of kilos of food from restaurants, cafes, hotels, supermarkets, wholesalers and corporate kitchens down the east coast of Australia each month and distributes the produce to 500 charities across the country.

While there are obvious benefits to those who will receive the bowls of sweet potato soup, Gault says there are also benefits to Eagle Boys and its staff working with charities.

“It’s something that is really important for any company and its employees to be a part of,” says Gault. “We’re dispensing that stock to people who might not be able to go out and buy food themselves.”

Gault says the donation also goes “hand in hand” with the chain’s other charitable work, including chief executive Bruce Scott’s efforts to raise $20,000 for St Vincent de Paul through the recent CEO Sleepout.

“We’re very lucky to have a roof over our heads and be able to feed ourselves, so it definitely makes us feel better if we can help others,” says Gault.

Gault says Eagle Boys will consider donating more produce to OzHarvest next time they change their menu. And she says other companies should consider doing the same.

“There’s no point throwing food away if there are people out there who can’t afford to go out and buy food,” she says.