Cash, debit, credit, or lay-by; until recently, these were the only mechanisms for payment. But now there’s a new kid on the block that’s making in-roads.

Afterpay is a facility that lets customers take the goods today and pay for them in four installments. Think of it like a reverse layby where instead of people getting their hands on their purchase after they’ve paid off their debt, they get their goods immediately and pay it off later on.

Afterpay will be attractive to consumers because it feeds Short-Term Bias – the human desire for immediate gratification.

The instalments also spread the payment cycle over a longer period than credit cards typically allow (55 days), so consumers can stretch their money.

The risk for consumers is they buy and use the product now, don’t feel any pain of payment, lose track of how much they owe and get hit down the track.

In this sense Afterpay is like a credit card where debt can accumulate “silently” and result in longer-term financial difficulty. Added to this, consumers tend to be overly optimistic about their ability to control their finances and think that only other people would be silly enough to get caught short.

Afterpay is likely to be appealing to retailers because it secures the sale there and then, particularly for segments of the market (like youth) that don’t have access to credit cards but also don’t have a ready supply of savings. It’s no surprise that retailers like TopShop have embraced Afterpay as an option, enabling trend-hungry consumers to keep pace with the latest fashion.

As they say on their shop front window in Sydney, “Shop Now. Wear Now. Pay Later”: a compelling proposition. 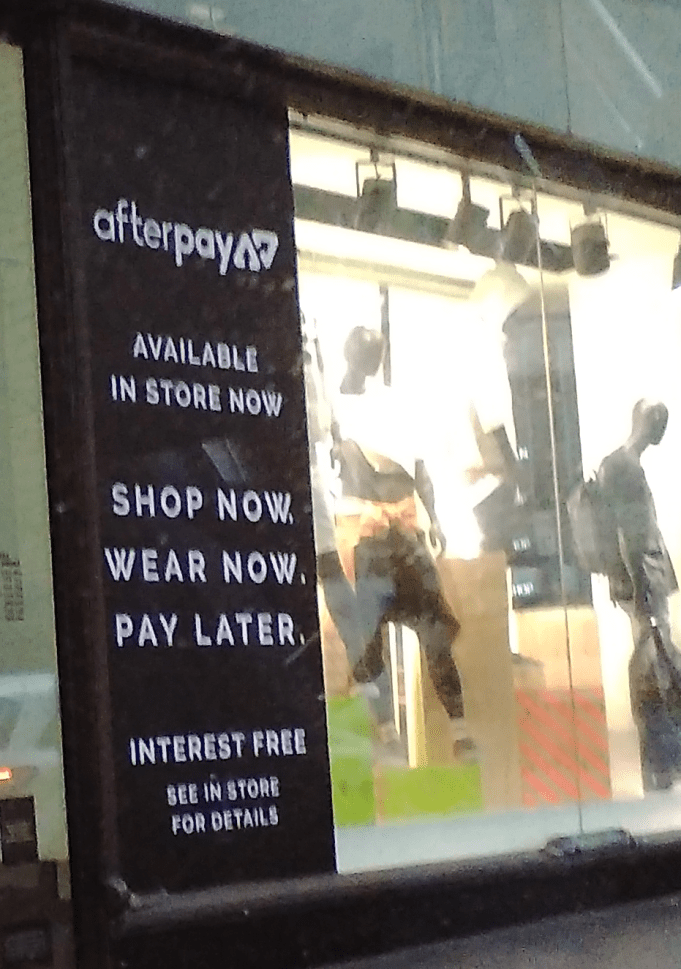 Furthermore, Afterpay pays the retailer in full at the time of sale, assuming all risk of default. This is important because this reduces the retailer’s anxiety about managing stock and cash flow.

Afterpay have looked at a problem and come up with a solution: consumers want goods today but don’t have the means or motivation to pay for them. While I personally don’t like mechanisms that make it easier for people to spend money they don’t have, from a behavioural perspective, Afterpay is giving a segment of consumers and retailers exactly what they want, and disrupting baked-in financial institutions along the way.

For too long the banks have held consumers and businesses hostage to merchant fees, so the rise of PayPal, micro-lenders and now Afterpay are at least stirring the pot.

Bri Williams deletes all buying hesitation and maximises every dollar of your marketing spend by applying behavioural economics to the patterns of buying behaviour. More at http://www.briwilliams.com.au.