Your need to be right is holding your business back

It feels nice to be right all the time.

This is what you’ve worked toward all these years. It’s so satisfying knowing that you are the smartest one in the room, the one with all the answers. You’re pretty clever, aren’t you? Well done.

Sorry to pop your bubble, but your constant rightness is counter-productive.

Step back and ask yourself what’s your actual task in business? Is it a) to be right, or b) to get other people to do what you’d like them to do?

There are no wrong answers but the latter is pretty important if you want a business that functions when you’re not in the room. Option ‘b’ will build you bigger, better things.

If you want people to help deliver your grand plans, it works best when they feel good about it. When they feel they’re making a contribution. When they thought up something good themselves.

The basic act of having an idea and putting it forward is a positive contribution. Plenty of people go through their working life with no ideas at all. Some of them reach the highest levels of government.

Don’t crush the ones who make the effort. When they have ideas, some of them might be wrong. Or just not as right as yours. How much does it really matter, in the long-term scheme of things?

Your constant need to win small battles grates in ways you don’t notice, because you’re too busy doing mental finger-guns, like ‘heyyy, I won that conversation’.

The wily manager classifies ideas into:

You let some of the not-so-good ideas through, because it lifts morale and builds up credits for when you have to squash the really awful ones.

Be smart, be lazy

A while back we looked at the simple yet compelling management model from 1930s German general Kurt Von Hammerstein-Equord* (emojis are mine). He suggested people can be classified into four characteristics: smart, stupid, energetic and lazy. And that all people have two of those qualities. 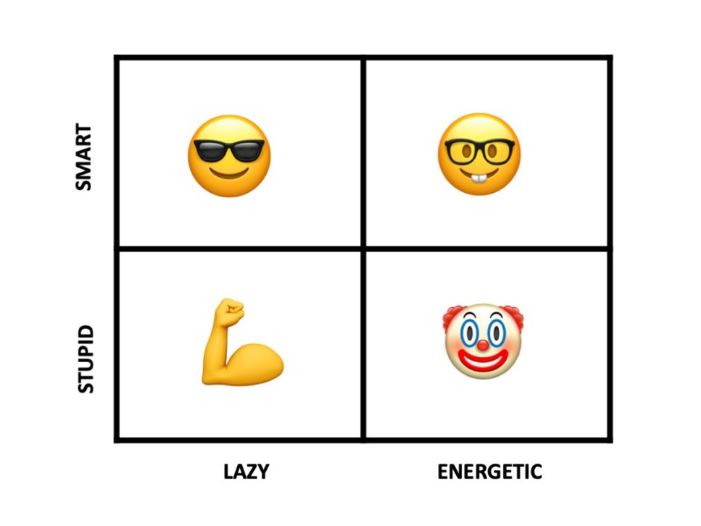 His theory was that the best managers are in the smart-lazy quadrant, because they sit back and plan the best ways to get everyone in the other three quadrants to do more work.

The smart-energetic people are useful, but peak just above middle management, because they get bogged down in the detail. They are the ones who care deeply about being right. Let it go, and move up to greater things.

(The full story is kinda interesting and the highest-viewed story I’ve written. You can read it here and here.)

A really powerful thing to say to people

Sometimes it’s actively helpful to not be right. It can make others want to help you out. People like to help. If you let them help you, they’ll like you more. And they’ll feel good about themselves.

May I suggest a line to use when you’re in a potentially-adversarial situation with someone below you in the pecking order?

‘You know what? You’re right.’

It’s a really powerful thing to say. It’s the adult version of a cool elephant stamp. It costs you nothing, other than suppressed egotism. It makes you look like someone worth following, rather than the standard insecure command-and-control manager.

Your rightness doesn’t teach people much

You might also think people are learning from you and your constant rightness. True up to a point.

It’s not an effective lesson though. (I covered this in more depth in last week’s SmartCompany Brains Trust feature.)

“People don’t really learn from being told precedents, lists or what you would have done. It’s not memorable. Nothing beats sticking their hand on the hot frying pan and learning how a good self-searing feels. Once is enough for most people. You can tell good people by how quickly they learn from pain.”

Read the rest of that story if you’re interested in how to get people in other cities or countries to do their best work when you’re not around. We have businesses across the country we don’t work in, and an essential part of that is investing in letting people make mistakes we wouldn’t have made ourselves.

An exciting test of your nerve, but worth it.

When can you be right?

Oh my god, most of them were insufferable.

If you’re smart, try not to constantly remind people of that fact. Taken to extremes, the urge to be right at all costs has created the sulphuric hell-pit that is internet comments. There are no winners and nobody is persuaded of anything.

Don’t let me discourage you from giving advice if people ask for it. Remember you might have the knowledge and experience, but what’s right for you might not be right for them. As any good mentor will tell you, if you’re not learning as much from the person you’re mentoring, you’re not doing it right.

You knew that. I’ll stop with the advice now.

*Interesting guy. He was also an ardent opponent of the Nazi regime and was involved in several plots to overthrow Hitler.

NOW READ: Stop telling us how busy you are, it’s boring and charmless

NOW READ: Bezos, Benihoff and Dorsey-times-two: What were these startup chiefs paid at the point of IPO?