From grit to gold: Three lessons business can learn from our Olympians 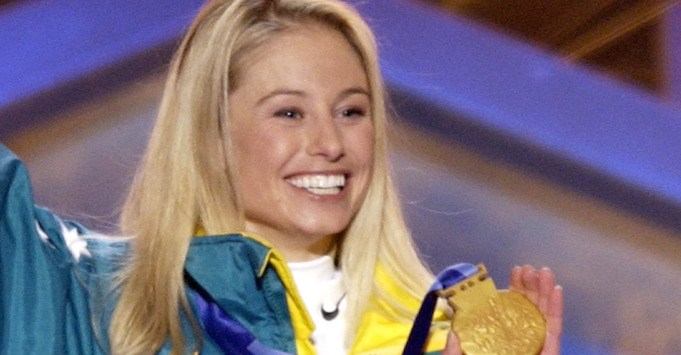 Alisa Camplin with the gold medal she won in the women's aerials at the Salt Lake City Winter Olympics in 2002. Source: AP Photo/Darron Cummings

There’s nothing quite like watching an Aussie win gold at the Olympics. As Mack Horton hit the wall to win the 400m freestyle in Rio, it was a celebration for him and the nation.

There are some clear parallels when it comes to small business and sports. In fact, the training routines of world-class athletes like Horton can provide a wealth of inspiration for entrepreneurs.

Business consultants say core principles of sports psychology can be used to perform better in business. Concepts like goal-setting and positive internal talk can work wonders for entrepreneurs.

There are a host of lessons small business owners can learn from Australian Olympians – past and present – for business success.

No pain, no gain

The one thing both small business owners and athletes can be sure of is there will always be setbacks on the road to success.

German gymnast Andreas Toba has become an unexpected hero in Rio after he completed a pommel horse routine for the sake of his teammates with a torn anterior cruciate ligament (ACL) he incurred during a floor exercise.

Australian ex-gymnast and sailor Alisa Camplin was in her early twenties when she bought her first pair of skis. She started on a mission to win a gold medal at the winter Olympics in aerial skiing with no previous experience.

Her passage to the Olympics involved seven years of hard work and countless setbacks. She broke her collarbone and hand, separated her shoulder, dislocated her sternum twice, ripped her hip flexor out of her groin, broke both ankles, tore her right knee, cracked 12 ribs and suffered nine concussions.

Her determination through the struggle eventually lead her to Salt Lake City in 2002 where she completed two perfect triple-twisting double somersaults to win the gold medal.

Much like training for the Olympics, running a small business can be an occasionally torturous undertaking. Oftentimes it seems like the challenges never cease. It’s the business owners with sufficient grit to keep going and learn valuable lessons from their mistakes that will ultimately be the most successful.

Never underestimate the importance of culture

At the last Olympics in London, the Australian swim team had their worst performance in the pool since 1972, gaining no individual gold medals after a slew of underwhelming swims.

An independent review commissioned by Swimming Australia in the wake of the games found the core problem in London was the “toxic” culture of the swim team and its leadership.

It revealed a focus on individualism, bullying, weak leadership and a lack of bonding had plagued the team. It had created what was deemed a “lonely” atmosphere for the Australian swimmers and translated to the results.

A huge effort to turn this culture around has seen the Aussie swim team nab two gold in the first days of Rio.

This offers an important lesson to small business owners, the vast majority of whom run their business with the help of a small team. Creating a work environment that is both inspiring and supportive will undoubtedly improve the overall performance of your business, while failing to create this kind of culture can have detrimental effects.

Never be so focussed on outdoing your competitors or maintaining cashflow that you neglect to nurture the culture of your organisation.

In March, the Australian Paralympic Committee (APC) revealed it needed $2 million to make it to the Rio games. It costs the team $7 million to send the 170 athletes to the games, with the shortfall covering essentials like uniforms, medical aid and equipment.

Head of fundraising Rob Lawrenson said raising funding was “a challenge” but has raised $6,550,000 of the full target (Click here to donate).

The perseverance of the Paralympic team to raise money to compete is something many small business owners can relate to with cashflow a key stress factor for many. Like the APC, small businesses should look to all avenues to support them with their goals.

In finance, beyond the banks there are alternative lenders and credit unions that can offer better terms for funding. Or if you are looking to launch a new product, perhaps consider something like a Kickstarter campaign to fund pre-orders.

David Brennan is the founder and chief executive of Kikka Capital.