Whether they’ve lost thousands or millions, here’s how these entrepreneurs recovered from costly mistakes

Entrepreneur Rick Rowan says the costliest mistake he’s ever made in business set him back millions of dollars locally — and tens of millions internationally.

“I wasn’t thinking big enough,” the head of health-tech company PainPod admits when recalling how he didn’t plan enough for how to scale the business. This led to big missed opportunities when they first came around.

“The fallout was that when we received great positive media exposure and the interest in the business grew exponentially, there was no infrastructure systems and planning in place,” he says.

PainPod was founded in 2014 and its current annual turnover is approaching $2 million. While the mistakes of years gone by might have cost PainPod in terms of growth, Rowan says the business has now implemented consumer retention systems and the management processes it needs to be ready to scale globally.

Rowan has been able to realise his mistakes and put the groundwork in place to rectify these, but he’s far from the only Australian entrepreneur who has ever made an error.

When we asked SmartCompany readers this week which areas of business had led them to the most mistakes or bad decision-making, they nominated the everyday tasks associated with running a company, like hiring staff and getting new customers.

In a survey of business owners on Twitter, 67% of respondents said hiring staff was the most challenging area for decision-making. This was followed up by obtaining new customers at 18%, and growing efficiently, at 10%. 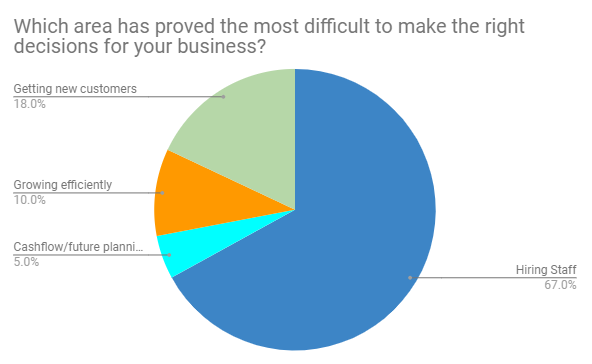 Each of these areas require business owners to execute hundreds of decisions each month — but sometimes, it can take significant time to work out what the cost of an error is, or how to rectify it.

Where the cost of the mistake is clear, you may not have much time to work out how to absorb the impact. Last year, Winning Appliances chief executive John Winning told SmartCompany he took just five minutes after noticing a $100,000 pricing error on his company’s website before deciding he could not disappoint customers by failing to deliver a mis-priced product.

But how do you go from noticing a mistake to learning from it into the future? We asked entrepreneurs to reflect on the area of business that has caused them the costliest errors or most pain, and how they act now to avoid similar situations in future.

Co-founder and chief executive of designer clothing rentals business Glam Corner, Dean Jones, says he will never know the price of his most costly business error.

“One of the biggest mistakes I’ve made as CEO of a fast-growing startup has been not hiring some great potential recruits when the opportunity arose,” he says.

Jones says businesses need to invest significant time when looking for and hiring the right staff, but initially, Glam Corner learned this the hard way.

“The worst part about that is you don’t really ever know what scale the true cost of that was — you’ll never have a chance to find that out,” he says.

For GlamCorner, identifying this error led to a rethink of how the business, which now rents out clothing to the value of tens of millions of dollars each year, builds its team.

“On the plus side, we’ve learned from these sorts of experiences and now move very fast to recruit great people we come across,” he says.

Business owner Emma McNeilly recalls how several years ago, she made a “very costly” mistake when trying to launch a range of wedding invitation tea towels in her personalised linen business, Expressions Australia.

“Being overly enthusiastic we came up with a vast range of possible search terms that couples searching for unique wedding invitations may use,” she tells SmartCompany.

However, the company underestimated the size of the wedding market and hadn’t set a strict budget for Google Adwords. This meant the company didn’t have a cap on how much it was going to spend to market the product.

The result was spending “tens of thousands of dollars that resulted in very few leads”, McNeilly says.

The experience hasn’t put her off the idea of purchasing adwords to find new customers, but it did instil new ground rules for how the business promotes itself in future.

“Set a budget for your campaign with a daily budget spend limit. [And] be very targeted with search terms, ensuring that when someone does click through, it’s because they really are interested in what you offer,” she advises.

For many business owners, there’s no shortage of commentators and voices wanting to pass judgment on your business decisions. But owner of Allerton Swimwear, Pia Griffiths, saying listening to the wrong voices has cost her dearly in the past.

While she prefers to think of wrong turns as learning experiences rather than “failures” or mistakes, she observes her early experiences starting her company taught her a lot about who not to listen to.

She says she’s the first to admit she has “a lot to learn” about business, but in the world of fashion, she’s learned listening to external feedback can be fraught.

Griffiths says she’s been burned before by taking advice from others about production decisions even though she wasn’t happy with the product, only to have the final article not sell as well as she’d hoped.

“It’s hard to put a dollar value on it, but putting a style into production again costs thousands,” she says.

“Being pulled in different directions by too many opinions can sway the business from what it stands for, and can really take it off track,” Griffths says.

Her new approach is listening to all opinions when it comes to her designs, but not actually taking all of this advice on board.