Want to break into China? How a simple suggestion led Melbourne business dog&boy to global markets 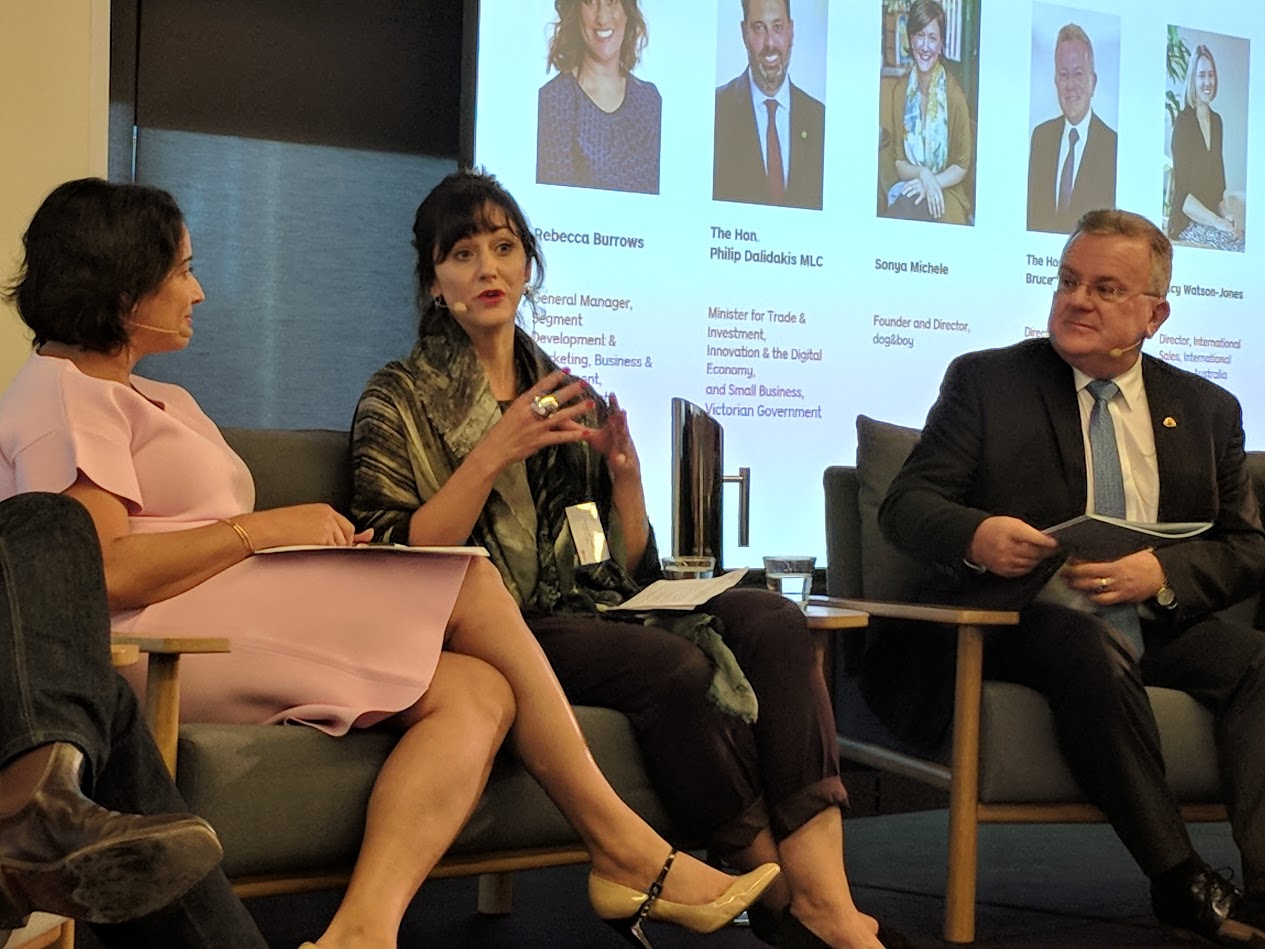 Sonya Michele has experienced a “baptism of fire” since launching Melbourne scarf business dog&boy at the start of 2016, as she continues to focus on taking on some of the biggest consumer markets on Earth.

The entrepreneur left the corporate world in 2016 to chase her “lifelong scarf obsession”. Michele quickly forged a vision for her business, inspired by the sketchbooks of her mother, who passed away from brain cancer and whose creativity inspired the design of dog&boy’s products.

“This is so different [from what I did before], but so rewarding,” Michele tells SmartCompany. The “baptism of fire”, as she calls it, has seen her negotiate everything from the blueprint of a company launch to global trade, all within three years.

Having bootstrapped the business so far, Michele looked to sow global rewards from her business early on. First came the online global store, which she says was a “an easy one”.

It wasn’t long, however, before she was at a Trade Victoria event and the idea of China partnerships as a growth strategy was suggested. The idea appealed, and the business started wondering whether it was too early to investigate global distribution.

“We hadn’t planned to export as early as we did. I mean, we did so when we were just over 18 months old,” Michele says.

“Our systems probably weren’t right up to where they should have been at that point, but we got there. It was just about rushing to get that in place.”

Less than three years on from her initial idea, dog&boy now exports to China with a local distributor, and is looking to launch in Indonesia in the coming months, as well as making a tilt at the US market.

“The ultimate goal is to be distributed in [clothing retailer] Anthropologie,” Michele says, joking that if anyone has a good contact, they should let the company know.

Exporting currently brings in 10% of company revenue and the goal is to quickly double that — or ideally go well beyond 20% in the coming years, Michele says.

These early-stage exporting experiences of dog&boy were highlighted on Monday as part of an Australia Post panel focusing on the national mail carrier’s research into SME exports.

More than 2600 small Australian businesses were surveyed by Australia Post about their processes and practices in exporting products. Only 27% of small businesses surveyed said they export, but there was a trend among younger retailers, like Michele’s company, to explore overseas markets when opportunities crossed their radars, rather than waiting for years.

Michele’s business is still an early-stage operation with three permanent staff and a range of freelancers. She says the company’s size hasn’t been a barrier to going global, but suggests other businesses take heed of some exporting truths before they head overseas.

You can’t do it for free

The company is still working out how much its exporting projects have cost it so far, but Michele says businesses need to be prepared for countless unexpected costs to pop up when taking this path.s

“Do things in an informed way, because time and money is something you definitely need when you export,” she says.

Everything from travelling, to the markets you want to export into, to paying for logistics and platform set-ups — once you start the process, you have to foot the associated costs, she says.

“For example, I’ve just had to engage a third party to build the website for my VIP.com presence,” says Michele, who is unsure what the final cost on the first stage of the company’s China exports plan will be.

Businesses that export also have to take a crash course in foreign currencies and appropriate pricing to make sure wherever you go, your offer is compelling and reasonable for customers.

“Wherever you are, the first thing people will do when shopping is get online and look at prices. These have to fit with the local market; you can’t be super cheap or exorbitantly expensive,” she says.

You have to ask as you go

Michele’s business has taken opportunities to expand as they have arrived, but to be successful in exporting, she says you have no choice but to ask question after question to make sure you’re on the right track.

The company’s current plan to enter the Indonesian market came from just calling and emailing around until it found the right contact, using the support of local trade councils and advice.

“I would regularly shoot an email off [to Trade Victoria], saying, ‘Can you direct me through to someone who could help me with this?'” Michele says.

“Through this, I was directed to the trade commissioner in Jakarta.”

Michele says it’s important to ask people in the know how your company should get to the next step: instead of worrying about your lack of knowledge, focus on the types of global opportunities you want to achieve.

“Just target the market that you want to target,” she says.

NOW READ: Eight entrepreneurs open up about the first time their companies made revenue