A South Australian vitality drink created by an eye surgeon has been launched in South Korea, with the distinctly Aussie beverage set to be stocked in 24,000 convenience stores there within weeks.

The first product from company Red Kangaroo Beverages, Kanguru, launched in Australia in April 2018 and has achieved significant growth in the past year to reach national distribution.

Its Australian drinks are manufactured at Bickford’s Australia in Adelaide, which also acts as the company’s research and development hub.

Now, a deal with leading Korean beverage manufacturer Binggrae has resulted in Kanguru being made locally for the Korean market from this month.

Under the deal, about 300,000 250ml cans of the multi-functional botanical infusion drink will be distributed to 20,000 Korean convenience stores over the next three weeks.

The sugar-free drink contains five natural botanicals — Korean red ginseng, yerba mate, guarana, schisandra and green tea — and a set of B vitamins, with its caffeine derived only from the guarana and green tea.

Its creator, Dr David Kitchen, an ophthalmologist by day, researched the idea for two years and then spent a further two years testing 2000 samples before settling on his own formula.

“I used to drink a lot of other energy drinks and coffee and I was talking with a friend of mine about what was in these drinks and the next thing I knew I was researching the ingredients and then I started developing my own formula,” he said.

“Being a medico, I took a scientific approach to work out which ingredients and in what amounts were beneficial.” 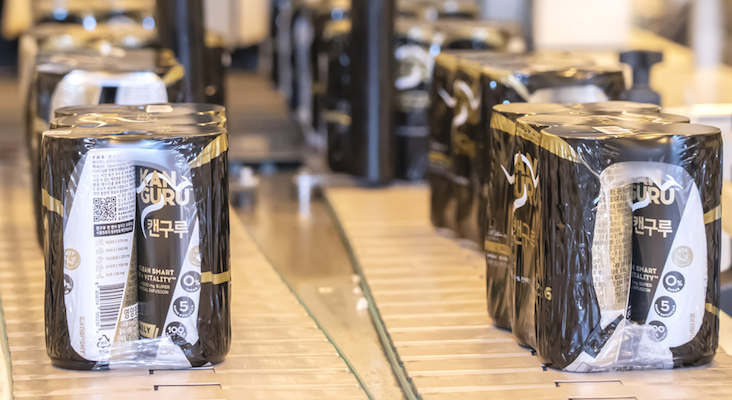 Kanguru coming off the Korean production line. Source: The Lead

Kitchen grew up in Adelaide and studied medicine at Flinders University but has lived in regional Queensland for more than two decades where he runs eye clinics in Rockhampton and Gladstone.

However, as a lot of his friends and business network are still in South Australia, he chose to make Adelaide the centre of Red Kangaroo’s Australian business and base half of the company’s six staff in the South Australian capital.

The South Korean connection comes through another South Australian expat, David Westall, a former CEO of Coke Korea who lives in South Korea and has been instrumental in the manufacturing and distribution deal with Binggrae.

Dr Kitchen said the Kanguru trade mark had also been registered in other Asian countries including Vietnam and Japan.

He said the use of key botanicals that were already familiar to the Asian palate, such as Korean red ginseng, made the region a natural fit for the product.

“Korea’s got twice the population of Australia in a space the size of South East Queensland and they understand the ingredients and David’s there so that was the natural place to go,” Dr Kitchen said.

“It’s a very unique product that’s tricky to make so it’s taken us 18 months to be able to find the right manufacturer in Korea and bring in special equipment, but we’ve managed to get a nice reproduction of the product over there.

“The Koreans who have sampled it so far have loved it. They love the Aussie aspect and the kangaroo and the product resonates with them nicely because they understand the botanicals.

“It’s mind blowing in a way because we’ve only got about 5500 or 6000 convenience stores in Australia, and we’re not in all of them at the moment, and in Korea we’re going to be starting off in 24,000 and that’s only about half of them.” 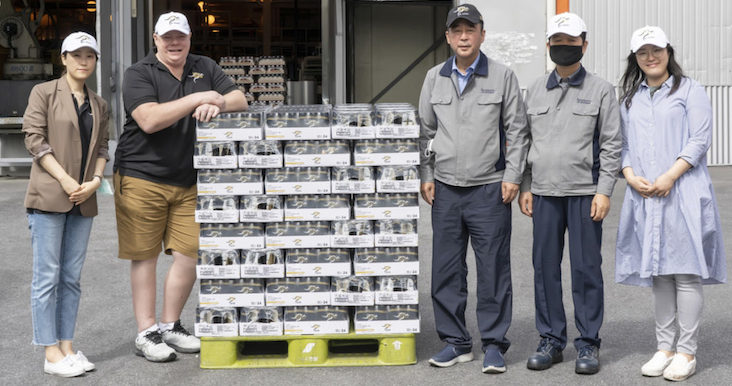 Kanguru’s David Westall with owner and CEO of their manufacturing partner Keumkang B&F, Mr Han, and his South Korean staff. Source: The Lead

Westall, who is Kanguru’s President of the Asia Pacific Region, said the long-term deal with Binggrae showed their confidence in the product and provided a stable launchpad for the product further afield.

“Within five weeks from launch we will be in more than half of all convenience stores in South Korea, which is an amazing achievement for an independent beverage like ours.

“We are thrilled to be entering into the South Korean market, knowing they lead the way with many trends, and we are honoured that they are backing an Australian innovation.”

Vice president of Binggrae’s Chilled Food Business Division, Mr Choi, said the credibility of the team behind Kanguru was exceptional.

“We are pleased to be bringing Kanguru to South Korean shelves and welcoming our partnership with the Red Kangaroo Beverages team,” he said.

“This product is a welcome addition to our range of beverages due to its health benefits and its scientific, evidence-based formulation – it is completely on trend for this market.”

In Australia, Kanguru is sold through Drakes Supermarkets, Foodland, convenience stores, petrol stations, pharmacies and health stores across all states and online through Amazon Australia.

A new flavour, Mixed Berry & Pomegranate, was launched in Australia in January. Although only the original flavour is being initially sold in South Korea, the company expects to introduce new flavours there in the next 12-18 months.

“I liked it because it was kind of on the edge of discovery, which is what I was doing in developing the product,” he said.

But despite the initial success of the drink, Dr Kitchen said he was not planning to give up his ophthalmology career.

“I really enjoy medicine and I’ve worked hard to get here and I’ll never give that up but I’ve always been entrepreneurial and I’ve done it to bring the world’s first botanical infusion beverage to Australia and now South Korea and I want to take it globally,” he said.

“I wanted to have the best product that was available so that I could stand behind it as a doctor and be proud of it, which I am and I can do.

“I think once people understand what’s in our drink and what’s in other drinks that they’ll say ‘why would I drink that’ when our drink gives so much benefit plus it’s got no sugar and it tastes really good.”

NOW READ: Social media influencers are shaping the popularity of “clean eating” brands and the trend is set to continue