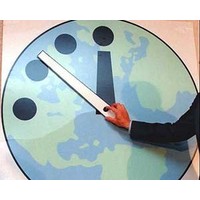 The World Bank has released its starkest warning yet of the catastrophic impacts of global warming should the globe warm by 4°C, an outcome it describes as both “plausible” and “the doomsday scenario”.

The report, Turn down the heat: Why a 4°C warmer world must avoided, was prepared for the World Bank by the Potsdam Institute from already-published scientific literature. It says that without further action and commitments, the world is on track to warm by more than 3°C above the industrial average, despite current carbon-reduction policies aiming to limit warming to below 2°C. The report states there is a 20% chance the world will warm by 4°C or more, possibly by 2060.

The report looked at the likely economic and social impacts of climate change, saying that while the poor were likely to the most affected, even developed economics are at serious risk. “A series of recent extreme events worldwide continue to highlight the vulnerability not only of developing countries but even wealthy industrialised countries,” the report states.

For the World Bank, where the primary purpose is to foster economic development in impoverished nations, “the lack of action on climate change not only risks putting prosperity out of reach of millions of people in the developing world, it threatens to roll back decades of sustainable development”.

“It is my hope that this report shocks us into action,” wrote Dr Jim Yong Kim, the World Bank president, in his introduction. “This report is a stark reminder that climate change affects everything. The solutions don’t lie only in climate finance or climate projects. The solutions lie in effective risk management and ensuring all our work, all our thinking, is designed with the threat of a 4°C degree world in mind.”

The report outlined several threats to human ecosystems should the globe warm by 2°C or more. The risks are all greatly exacerbated should temperatures increase 4°C above pre-industrial averages:

Given the uncertainties about the scale and speed of these and other effects, the report cautions there can be no certainty that adaption to a 4°C world is possible.

“A 4°C world is likely to be one in which communities, cities and countries would experience severe disruptions, damage, and dislocation, with many of these risks spread unequally. It is likely that the poor will suffer most and the global community could become more fractured, and unequal than today,” the report states.

“The projected 4°C warming simply must not be allowed to occur – the heat must be turned down. Only early, co-operative, international actions can make that happen.”

The full report can be read on the World Bank’s website.