A new turn in the Australian-Indonesian relationship? 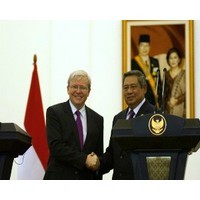 An Australian prime minister visiting Indonesia is nothing new, but Kevin Rudd’s current visit is generating more than the usual amount of attention, coinciding with the DFAT release of its Indonesia Country Strategy, and the day after one of Q&A’s most penetrating discussions from its Jakarta panelists.

While we historians can always argue about whether the current moment is the highpoint in Australian-Indonesian relations (more important than Australia’s support for Indonesian independence? I don’t think so), certainly the visit sends positive signals.

The three main issues discussed were the predictable ones; live cattle, refugees and Papua/West Papua. But both sides presented new angles on these issues.
Indonesian president Susilo Bambang Yudhoyono made it clear that refugees (‘boat people’) were not his country’s highest priority, but also made generous gestures to Rudd’s domestic concerns by showing that Indonesia wanted to do something about the problem.

His multilateral approach is right – it will be impossible for one country acting alone to stop the tragic loss of lives. There have to be regionally based attempts that include other ASEAN nations, and importantly solutions that include the source countries. Solving the problems of Iraq and Afghanistan is probably still going to be a tall order.

As yet no one has mentioned the strange anomaly of Australia’s two ‘external territories’ lying just off the coast of Indonesia: Cocos Keeling Islands and Christmas Island. Should their status also be part of discussions?

The cattle export issue requires a lateral solution, one that will not involve further animal cruelty. The idea of trying to develop some kind of joint industry is a positive one, since there are a lot of possibilities for a regional focus that takes in eastern Indonesia and northern Australia.

Doing this would actually reopen a connection with a deep past: I’m part of a project that has been researching the flourishing pearl-shell industry that existed between our two countries from 1905 to 1942. It is important to jointly develop larger endeavours, rather than focus on single aspects of trade. Encouraging Australian investment in Indonesia would be a good step along the way.

Papua/West Papua invokes an instinctive nationalist reaction from Indonesians. A new strategy of greater regional autonomy announced by the President would be a possible first step in healing this running sore. Nevertheless, Indonesia is yet to take clear action against members of the military and police responsible for human rights abuses. Doing so, and opening up the region to greater scrutiny by journalists and human rights observers, would go a long way to improving Indonesia’s international standing.

While the relationship is going well, it will not take much to unsettle it: there are enough inflammatory statements by Australian rednecks and Indonesian ultra-nationalists circulating online to show that it is easy to play to stereotypes on both sides.

A change of government in Australia would probably not greatly upset matters, unless Australia took wild unilateral actions. On the other hand, the 2014 Indonesian presidential elections take us into unknown territory. President Yudhoyono cannot run again, and there is little enthusiasm for his family members who want to run in his place.

A worst-case scenario would see Major General (ret) Prabowo Subianto become president. Prabowo’s record in East Timor, West Papua, and in the student riots of 1998 is well-known. The indications are that he would be much more aggressive in prosecuting an ultra-nationalist agenda than was his late father-in-law, Suharto. The pundits favour ex-furniture salesman and charismatic mayor of Jakarta, Jokowi (Joko Wibowo). He would be a liberal leader who could help develop the economy, but current predictions have it that Jokowi might run with Prabowo as his deputy. Indonesian democracy is now very robust, but will it be robust enough for such an arrangement?

While Q&A had a mainly Indonesian panel who could discuss matters of great complexity in English, it will be a long time before a panel of Australian media editors, NGO leaders and government advisors will be able to speak so eloquently in Indonesian.

One of the biggest challenges is addressing the asymmetrical nature of the connection between our countries. My Indonesian interlocutors brought this home to me in Jakarta by asking whether Indonesia really needs Australia as much as Australia needs Indonesia? I don’t have easy answers to that question, but finding ways to address it should be a major preoccupation of the political leaders on both sides.

Adrian Vickers is a professor of Southeast Asian Studies at University of Sydney.