Beyond the mining boom: From resources to infrastructure 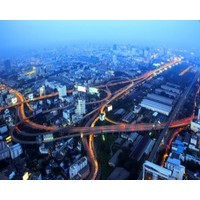 The term of the new Australian government – whether finally led by Kevin Rudd, Tony Abbott or Malcolm Turnbull – will be shaped by one dominant economic reality: the end of the mining boom. The immediate issue facing a new government will be to avoid a recession over the next couple of years, as mining investment falls sharply and the terms of trade boom recedes. This means that ways have to be found to provide strong stimulus to the economy, even though budgets are in deficit and much of the Reserve Bank’s monetary policy ammunition has been spent.

The answer, I suggest, is a focus on financing infrastructure on a large scale. As well as boosting demand, this will help to make our economy more productive and more efficient, and deliver direct benefits to ordinary Australians.

In order to see why infrastructure spending is our best way out, it’s important to understand what has brought us to this current situation.

Australia’s resources boom has had three elements: high prices for exports relative to imports (high terms of trade), strong investment and increased resource exports. Each of these dances to the beat of a different drum.

The national accounts tell us that the terms of trade rose early, increasing by 80% between the end of 2003 and 2008, and the exchange rate followed the terms of trade up. They peaked in 2011, and are now about 15% below that peak. Higher prices for commodities helped to generate the boom in investment, which took off from about 2005 and has peaked at well over $100 billion per annum in 2012-13. Resource investment might fall by half over the next two years, as projects are completed and few new ones start up.

Exports of resource products, in volume terms, have been increasing slowly in recent years, but will grow rapidly as projects are completed, perhaps doubling in the period to 2020. But these projects use few workers and are largely foreign-owned, so they contribute little to demand in the local economy.

For a decade, the net effect has been strongly positive. The boost to incomes and activity from the first two has much more than offset the impact of the high Australian dollar. But now Australia faces a major deflationary demand shock as the resources boom unwinds, again more than offsetting the impact of a falling Australian dollar. While the precise magnitude and timing of this shock cannot be known, a shock there will certainly be.

The fact that we have been through the biggest resources boom in our history without any significant increase in inflation is a great tribute to our labour market and wage-setting institutions.

Labour market reform and productivity-enhancing reforms are worthwhile, but they are unlikely to contribute substantially to dealing with the deflationary shock that we are discussing. It is disappointing that these issues divert attention from the key challenge: to manage the implications of the unwinding of the resources boom for domestic demand and employment, and to avoid a recession.

Australia has a strong fiscal and public debt position and is recognised as having extensive ‘fiscal space’ to address shocks, such as those discussed here. But the current state of federal and state budgets qualify that assessment.

Australian government revenue, as a share of GDP, is currently at a historically low level, and is likely to grow only slowly over the medium term. This is because of slow growth in the non-resource sector and in tax payments from resource companies. The Treasury is forecasting continuing cash deficits out to 2016-17, on revenue projections that recently have proven unduly optimistic. In addition, the focus of the political debate remains firmly on deficit elimination and debt reduction, still reflecting the attitudes of earlier stages of the resources boom.

In response to the emerging deflationary shock, the government should follow a more expansionary fiscal policy, with continuing deficits and increasing debt, as the OECD has suggested. But the extent of this response will be limited by the factors noted above. It will also be limited by uncertainty about the long-run revenue receipts from resources projects. An additional response is required.

From resources investment to infrastructure investment

It is widely agreed that Australia has a massive infrastructure backlog, amounting on some estimates to 40-50% of GDP or $700 billion. A good account of the challenge is outlined in Infrastructure Australia’s June 2013 report to COAG. A central task for policy now is to find ways to stimulate large-scale infrastructure investment. What is required is a substantial new program, with new projects to the value of, say $200 billion, committed over the next few years.

Achieving large-scale infrastructure investment needs innovative ways of both funding (paying for) and financing (raising debt or equity capital for) infrastructure. Some of this can be done through the private sector, or by selling assets.

But most infrastructure is the responsibility of state governments, which have very little capacity to raise extra debt or to finance major infrastructure investment. The Commonwealth has a very strong position in debt markets, but has limited inclination to fund infrastructure in the states’ areas of responsibility. But, as a result of the resources boom, the states are gaining increased revenue through mining royalties, which could reach $14 billion by 2014-15 and perhaps $20 billion by 2020. These funds flow initially to the resource states, but then up to half are redistributed to other states through the fiscal equalisation system.

If the federal and state governments were to set up a joint infrastructure funding body that could borrow with an Australian government guarantee, a component of the GST pool could be directed to the financing body each year to meet funding costs. This, in effect, would be a use of higher resource revenue (for the resource states) or of the benefit that non-resource states get from resource revenue. For the Commonwealth, it would have no initial impact on the budget deficit, but would increase the level of debt guaranteed. In the longer term it would contribute strongly to the Commonwealth’s revenue, therefore repairing its budget position.

In the present climate it seems silly to propose a major initiative based on federal-state cooperation – but it has happened in the past. A major infrastructure initiative would be a win-win situation, providing benefits for both levels of government and for the Australian economy.

Peter Sheehan is the director of the Centre for Strategic Economic Studies at Victoria University.