Big Money: Let’s not kid ourselves on debt or austerity 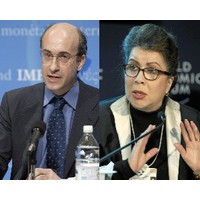 Economists often get criticised for shoddy predictions, but rarely like this.

“Growth in a Time of Debt”, a 2010 paper by two influential Harvard University Economists which has had a huge amount of influence on policymakers, has been discredited by a trio of less well-known economists who discovered a spreadsheet error in the original paper.

Specifically, five countries had been left out of the analysis. Add those countries in, and the paper’s argument becomes murky.

No one is suggesting the authors of the original paper cooked the data. Rather, it’s just an Excel error. A simple mistake.

“Growth in a Time of Debt”, by Carmen Reinhart and Kenneth Rogoff, looked closely at debt in 20 advanced economics. It found that when a country’s government debt exceeds 90 per cent of its GDP, that country’s growth turns negative. But with the missed countries added in, the average growth after hitting that 90 per cent debt threshold is more like 2.2 per cent.

It’s a big difference, and has proven a PR nightmare for Reinhart and Rogoff, as well as the countless politicians who used their arguments to justify fiscal austerity.

So, austerity is dead, right?

Here is where things aren’t as simple as they seem. While plenty of politicians, particularly in Europe and America, used the paper to justify austerity, the authors of the paper never intended that argument to be made at all.

They were warning against the negative impacts of long-term debt. They weren’t arguing for countries to have surpluses at all costs.

You can’t cut your way out of a crisis. It defies logic that a government should stop spending at the same time businesses aren’t spending and expect things to get better.

And just as the Reinhart-Rogoff paper wasn’t about austerity, an Excel error doesn’t suddenly mean debt isn’t a problem.

During the global financial crisis, Australia could easily spend its way to recovery precisely because it lacked large levels of public debt. If such a crisis were to happen now (and it’s unwise to assume it couldn’t), the Australian government would be far less able to respond.

There are few golden rules in economics. Like everything involving people, the particulars of the situation can undermine the predicted results of any regression.

Economies can still grow when their debt is equal to 90 per cent of GDP. But it’s no way to prepare for crisis.

And while austerity is highly controversial, debt reduction, which was the actual point of “Growth in a Time of Debt”, should not be.