Decentralised, diverse and flexible: Why Deloitte thinks offices in 2030 will look radically different 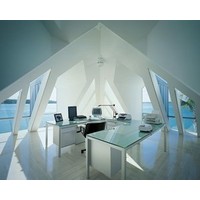 Offices haven’t changed all that much in the past 50 years.

Sure, the technology in them might be faster and more powerful. But we still do more or less the same things our parents did in our modern monolithic office parks. We go in every morning, spend most of the day sitting at a desk that’s located in a row of desks, then at the end of the day, we leave.

But global accountancy Deloitte predicts the next 20 years will see sudden and rapid change in the work patterns of knowledge workers. And smart employers will have to keep up with these changes, or else.

“Into the future, the organisations which adopt fast will be the ones that see growth,” says Juliet Bourke, a partner at Deloitte and one of the authors of a new report about the future of the office.

“Those that hang onto this legacy of who workers are, and who they should be, are going to fail.”

That’s because Australia’s chief problem in 2030 isn’t likely to be a lack of jobs. Instead, it’ll be a lack of qualified, experienced knowledge workers.

This means to attract the workers they need, companies will need to attract them by offering best-practice work environments that fit in with the lifestyle workers want.

The expectations of knowledge workers will be higher. Technological change, as well as our increasing connectedness, means ideas spread faster. That, in turn, affects how quickly we adopt new workplace innovations.

One of the examples in Deloitte’s report deals with a German driver who was caught driving along an autobahn with a mobile office set up on his passenger seat. He was working as he drove. After being pulled over by police, the story became front-page news across Germany.

“Regus saw this as a huge opportunity,” Bourke says. “The connected with gas company Shell and said given people out in the field need office space, we should build offices next to petrol stations. And that’s exactly what they did.

“It’s become a new way of working, and follows the general trend we’re seeing of offices moving closer to workers. Offices have to become responsive to workers, and not the other way around.”

For AMP Capital, who sponsored Deloitte’s research, this is of vital concern. The company funds office precincts that are designed to last for 80 years. “They’re already thinking, what are the kinds of precincts that’ll attract people into the future,” Bourke says. “And the thing is, work can now happen in lots of different places. So it is very much a matter of attracting people to you.

“Worker populations are going to shrink. The number of people within buildings will decline. You won’t need all those floors. So there’ll need to be more flexibility in office space, and an emphasis on attracting people.”

Deloitte investigated whether offices were likely to disappear altogether by 2030, but concluded this probably won’t happen.

“All of us in some ways are going to be connected in the cloud. But people don’t like to just connect with electronics. We’re social animals and we like to be with people. So there was a countervailing pull to the ground. As people work in the cloud, they want to be in a community.

“What that means for offices is there’s an opportunity. Workplaces shouldn’t be thinking about demanding, but about attracting people – locating in vibrant areas. If you want the best, scarce talent – you need to have an attractive workplace.”

The future of the office: What will change