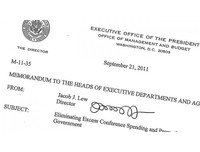 With smartphones and tablets now the default communication tools of the day, many leaders don’t think about whether their handwriting is any good – but a recent controversy in the United States suggests that might be a mistake.

Treasury secretary-designate Jack Lew has been the target of criticism after revealing his signature, which is set to appear on all US paper money, is simply a series of the letter “o”.

Barack Obama even issued a statement shortly after the controversy broke, telling the public that Lew “assures me that he is going to work to make at least one letter legible in order not to debase our currency”.

The controversy is mostly tongue-in-cheek, (current secretary Timothy Geithner had to work on his handwriting as well), but the incident raises a key issue in an age of digital communication – do leaders need to have good handwriting?

The answer is a little complicated.

“Without giving it too much scientific thought, my gut feeling would be that if you have the power – you can do whatever you like,” says image consultant and founder of Image Group International, Jon-Michail.

“Your signature can be a squiggle, like a lot of the signatures of powerful people, and it won’t make one iota of difference.”

However, there’s a caveat here. While many people in powerful positions can get away with such a signature, Jon-Michail says it’s a little different if you’re the head of an new business, or if you’re trying to raise money.

Having poor handwriting could leave a bad impression, especially if other parts of your presentation aren’t up to scratch.

“If everything else is not okay, then the little things do matter. People will look for things to pick up, especially in a political or corporate environment,” he says.

Jon-Michail makes a number of comparisons. He says most actors have terrible signatures and yet aren’t affected in their careers. He says entrepreneurs need to focus on the important aspects of their personality when making a pitch, or raising money – if you don’t have those right, then handwriting will become a problem.

“If they’re not getting the main parts of the business in position first, then handwriting will become more important.”

This piece was first published on LeadingCompany’s sister site, SmartCompany.