Dream office: Cashing in on the creative classes 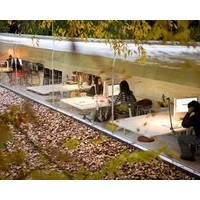 Proximity to clients can be an argument in favour of a CBD office, as is the prestige of having a city address.

But finding a spot on the city fringe, or in the right kinds of suburb, can give your company’s culture a shot in the arm. The National Australia Bank, for example, has an office in East Melbourne, just a hop, step and a jump from the top end of Melbourne, as well as its HQ in the Melbourne CBD.

Apple has put its flagship stores into the suburbs of Sydney, Melbourne and Brisbane, including Sydney’s Penrith, way out in the working-class west, stamping such areas with its own buzz and excitement.

Tim Hurburgh, a co-founder of mid-tier architectural practice H2O, set up camp in Collingwood, just north east of Melbourne’s CBD, 11 years ago. He says the inner-city suburb has become something of creative “precinct”, with lots of mid-sized companies following suit. It’s an area that is popular with creative businesses, and is gaining cache as more and more move in.

More than half a million Australians work in the creative sector, making it one of the fastest-growing, most dynamic segments of the national economy, according to ARC Centre of Excellence for Creative Industries and Innovation (CCI) at the Queensland University of Technology. The sector encompasses advertising and marketing, architecture, design and visual arts, film, TV newspapers and radio, music and performing arts, publishing, software and digital content. It is an area in which jobs are growing, new census data shows.

“This gives some feel for how this sector is emerging relative to two traditional ‘backbone’ industries.”

For H2O, the choice of Collingwood was a matter of convenience at the time: Hurburgh’s business partner, Mark O’Dwyer, wanted to live in the same premises where he worked. “Mark’s father was a country bank manager and always lived above the shop,” Hurburgh says. “Mark formed a view that any time spent travelling between where you work and where you live is wasted. He was looking for somewhere where he and his wife could live, and then this suddenly came up. It suited us.”

The practice has a large warehouse space, and O’Dwyer and his family live in the “caretaker’s” flat. The space is so large that is undercover parking for 10 cars.

“There are a lot of flexible, adaptable warehouse spaces that carry a lot of parking opportunities. There is the ability to park cars on site here.”