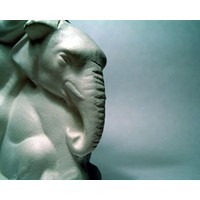 Treasurer Wayne Swan’s Budget might have grabbed the headlines for more than $32 billion worth of cuts and savings, but there was still plenty of money for programs and initiatives that are a little unusual.

SmartCompany has scoured the budget papers to find 10 whacky projects that survived Swan’s big axe. While we know these projects are very important for the people involved, and many are quite worth, they still raise a few eyebrows:

The Government will put $30,000 towards the erection of a statue of Slim Dusty and Joy McKean in the country music capital of Australia, Tamworth.

There’s $100,000 to conduct a feasibility study into the establishment of a Parliament House Walk from Canberra’s iconic building to its Civic Centre.

3. Cricket under lights in Canberra

Australia’s federal pollies clearly want to get down on a few day/night cricket games in the nation’s capital – the Government will spend $2.5 million as a contribution towards putting up lights at Manuka Oval.

This was one announced before the budget, but it bears repeating. The Government will stump up $12.8 million to attract production of the film The Wolverine to Australia. Hopefully the Prime Minister gets front row seats at the premiere for that sort of dosh.

You know those G20 meetings that are good for photo opportunities and not much else? Well, Australia will host one in 2014 and we’ll spend a staggering $326.9 million over the next four years to do so.

The 60th anniversary of the accession of Queen Elizabeth II will be marked with the spending of $400,000 over four year to establish a special scholarship for female leaders. Very worthy, but I’m sure a bunch of flowers for Her Majesty would have been much cheaper.

The Bureau of Meteorology will score $300,000 to conduct a trial of running advertising on its website. Apparently the ads won’t pay for themselves then!

The Government will spend $10 million over the next four years to extend a special excise refund scheme for Australia’s microbrewers. We’ll drink to that!

Buried in the spending initiatives in the Families, Housing, Community Services and Indigenous Affairs portfolio is a $36.1 million for an information campaign around the household assistance that will be provided under the carbon tax plan. Get ready for an impressive sell job.

The Government will spend $200,000 to establish an Apprentice Ambassadors program that will involve the support of “a number of high-profiled Australians” to promote the idea of doing an apprenticeship. Nice idea, but does it really need that much money?