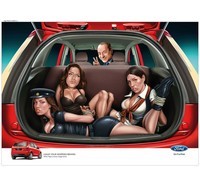 In a public relations slip-up as big as they get, the advertising agency for Ford accidentally published a tasteless ad.

Now both the agency, JWT India, and Ford are issuing apologies, according to a wide-spread reports.

The ads feature cartoon-type images of tied-up women celebrities — such as Paris Hilton, Kim Kardashians, tossed into the back of a Ford Figo. In one picture, the Figo is driven by Silvio Berlusconi, the former Italian prime minister, in another by Formula One driver, Michael Schumacher.

Aparently, the unauthorised ad was published on the AdsOfTheWorld website (since removed) without agency or Ford’s approval, and both have since issued apologies.

WPP Group, which holds JWT, told Business Insider: “We deeply regret the publishing of posters that were distasteful and contrary to the standards of professionalism and decency within WPP Group.”