A meaty question: Are barbecues bad for you? 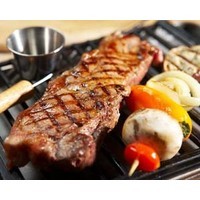 As we settle into the barbecue season, it’s time to consider whether the meat on your grill is harming your health. Conflicting messages in the media certainly don’t help. On one hand are advertisements with Sam Neill claiming red meat is the reason that humans are smarter than orangutans.

On the other, the prestigious World Cancer Research Fund reports that red meat may cause colorectal cancer. Whom to believe?

The good bits, and bad

Some red meat does contain fats our brains need. Omega-3 fats form part of the structure of brains and eyes, and may also help reduce blood pressure and modify inflammation. But meat isn’t the only food containing omega-3 fats. In fact, the richest sources are oily fish.

And if you buy grain-fed steak, you may be getting hardly any omega-3 fats at all. Grass-fed meat (and wild meats, such as kangaroo) is not only better for the environment, but better nutritionally, containing healthier fats and a lower fat content overall.

Red meat also contains decent amounts of zinc and protein, as well as iron, which is one of its big nutritional selling points. Indeed, the iron in red meat is in a form that our bodies absorb easily – “haem” iron.

Meat producers are fond of producing colourful ads that equate the iron content of a bucket-load of spinach with that of a small juicy-looking nugget of lean beef. And iron deficiency is an important issue – but that same haem iron may be harmful in fatty processed meat as you will see.

As well as beneficial nutrients, meat also contains saturated fat, the kind that promotes increased cholesterol levels in the blood and blocks blood vessels that the heart relies on to keep working.

The fat content of meat varies markedly with species and cut. If you buy untrimmed brisket, chuck or shoulder, or luxury marbled meat, such as wagyu or kobe beef, your meat will be around 10% to 20% fat. Ribs, neck, pork belly, and the cheapest minced meat can be up to 50% fat. You can get down to 3% to 5% fat if you trim your meat well of all visible fat and choose leaner cuts, such as loin and round steak, flank and shanks.

The cancer risk associated with high consumption of red meat, particularly processed red meat, is definitely cause for concern. In 2007, the World Cancer Research Fund (WCRF) produced an expert report that assessed the evidence for causal links between food, lifestyle and cancer, based on data from all studies that met quality standards.

In the report, the WCRF concluded that there was “convincing” evidence (that is, evidence of both the mechanism and the effect) for a link between colorectal cancer and high intakes of red meat. The link was strongest for processed red meat – bacon, salami, sausages and hot dogs, which contain curing agents such as nitrates and nitrites.

The studies’ data indicated that cancer risk continued to rise with higher meat intakes. This rise appears to start once red meat consumption exceeds 300 grams in a week. The WCRF’s recommendation is that people who eat red meat should consume less than 500 grams a week, including very little if any processed meat products. There was no data to indicate that any level of processed meat intake was free of risk.

Eating fish may help reduce colorectal cancer risk, and some studies indicate that a high fibre intake, and eating lots of fruits and vegetables, are associated with reduced cancer risk.

How red meat causes the increase in cancer risk is still a question in search of a complete answer. Many different components of meat have been suggested as a mechanism, including the curing agents nitrate and nitrite that are present in processed meat; the fat or the haem iron in meat; the excess protein load that big meat eaters might often consume; and the carcinogens, such as heterocyclic amines (HCAs)and polycyclic aromatic hydrocarbons (PAHs), that can be formed during the cooking of meat.

Protein doesn’t appear to be the culprit, despite the fact that the end products of excess protein intake are quite toxic (these are excreted if the kidneys are working normally). Unlike high-protein diets, high-fat diets have been shown in animal studies to increase cancer risk, apparently promoting gut cancers through their damaging effects in the gut as well as contributing to obesity, which itself is a cancer risk factor.

But studies of low-fat diets haven’t shown a reduction in risk, so other factors may also be involved. The problem with processed meat seems mainly to stem from its salt content (associated with risk of stomach cancer) and its content of nitrates and nitrites, which are added as part of the curing process and can be converted to carcinogens.

And unlike the iron in plant foods, the haem iron in meat seems to help produce mutagens and carcinogens in the meat and in the gut by reacting with the fat in the meat, and by helping to convert nitrates and nitrites to their carcinogenic form.

There are a lot of studies showing that the carcinogenic substances HCAs and PAHs are produced when you cook your meat at a high temperature or on an open flame, and that colorectal cancer risk increases when you consume a lot of these. Some people have a genetic sensitivity to HCAs and they’re at even higher risk.

Mysteriously, although barbecuing chicken and seafood produces large amounts of HCAs, these don’t seem to be associated with increased cancer risk, perhaps because they are different types from the ones that red meats produce. And perhaps their lower iron content has something to do with it.

Cooking for shorter times, or at lower temperatures, produces smaller amounts of HCAs and PAHs. Raw meat, surprisingly, is no less digestible than meat cooked briefly either at high or low temperatures. What really makes a difference in digestibility is overcooking until meat is tough. This reduces digestibility significantly but that increases again in long, slow cooking.

The magic of marinades

Interestingly, marinating meat may be a good idea for health as much as for flavour. A Portuguese study found that several hours’ marinating in beer or red wine significantly reduced the production of HCAs in beef, perhaps by reducing movement of precursor substances to the surface of the meat, or by adding antioxidants that inhibit the reaction.

Other studies have successfully used garlic, rosemary, thyme and sage, and olive oil with garlic and lemon. Cooking with extra-virgin olive oil had a similar effect. But adding sugar or fruit to marinades appears to increase the risk of burning and forming more carcinogens.

So, as you wheel out your barbecue this summer, consider serving sustainable seafood or organic chicken some of the time instead of red meat; stick to smaller serves of grass-fed lean meat, marinated without sugar or salt and cooked to a juicy medium-rare, away from a bare flame; and have plenty of salad with your meal. Food for thought?

Suzie Ferrie is a clinical affiliate at University of Sydney.