Innovation: The drones are coming 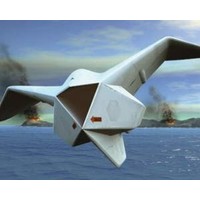 Cruelty at another Indonesian abattoir was captured by a small bat drone, or unmanned aerial vehicle, that flew in under the cover of darkness and attached itself to the roof.

In Sydney, a guard drone sounded an alarm and photographed the number-plates of a car driven by hoons who were threating a girl. And in Alice Springs, stockmen are negotiating with station owners over the number of drones each will have to look after, and the rates for their new responsibilities.

None of these scenarios are true. But in a few years, they all could be. Right now drones are being used to help surf lifesavers patrol our beachers. They are also delivering critical parts to mines safely and at a lower cost, and conducting aerial surveillance of mine sites.

Particularly in the US and China, the drone industry is approaching the steep part of the S-curve, with applications in news and journalism (getting behind police lines, reporting traffic) real estate (more exciting overviews of glamorous houses in hilly surrounds) mining, farming, traffic management, parks and reserves management, industrial espionage, public safety just a hint of the universe of possibilities.

In the last few years drone prices have dropped dramatically to an affordable few hundred dollars. Factors limiting commercial applications such as short battery life, noise and “seeing ability” will continue to challenge young technologists to innovate. We can expect extensions of flying time not dissimilar to the extensions of notebook battery life. Demand for helicopters and other light planes may fall off as drones demonstrate that they can do similar work for a fraction of the price.

Here and in the US, laws and regulations are changing in anticipation of – if not encouragement of – the drone swarm.

Inevitably, the laws will not anticipate all of the strange possibilities; although the big issues of privacy and safety (“there’s a drone in my soup”, or more seriously, “zooming recklessly towards my windscreen”) are clearly identified. There will likely be recreational drone zones and regulations focused on the safe use of the beasts.  The adequacy of the penalties for invasions of privacy, drone intimidation and drone noise nuisance will be debated fiercely.

The coming of the drones presents an array of new opportunities and threats. All trends eventually generate a counter-trend. Will people decide that enough peeping is enough, so that we finally see a tipping point towards stronger protection of privacy?  Could there be a drone impact around the corner for your industry?