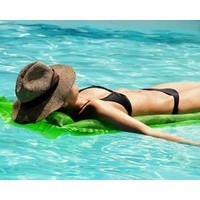 Myths abound about UV radiation and its effect on our health. We hear that sun-protection has triggered an epidemic of vitamin D deficiency; being tanned protects you from sunburn; a tan looks healthy; and “old” skin doesn’t need to be protected from the sun like “young” skin does.

What is beyond doubt is that Australia is the world’s skin cancer capital, yet skin cancer is the most preventable of all common cancer types.

Many of these patients might have thought their sun exposure was doing them good.

While some sun exposure is vital to good health, Australians in most parts of the country only need a small amount. UV radiation here is harmful to fairer skin types compared with UV levels in most other parts of the world populated predominantly by Europeans. The harms of sun exposure in Australia far outweigh the risks of vitamin D deficiency.

During summer, most of us get adequate vitamin D from just a few minutes’ daily exposure to sunlight on our face, arms and hands, on either side of the peak UV periods – before 10am and after 3pm.

In winter in the southern parts of Australia, where UV radiation is less intense, people need about two to three hours of sunlight spread over a week. In winter in northern parts of the country, you can still maintain adequate vitamin D levels by going about your day-to-day activities, so there’s no need to deliberately seek UV exposure.

Some groups are at higher risk of vitamin D deficiency, such as naturally dark-skinned people, those who cover their skin for cultural reasons, osteoporosis patients, people who are housebound and babies and infants of vitamin D deficient mothers. People in these groups should talk to their doctor about whether they need a vitamin D supplement.

The point is, we can all get our vitamin D without the risk of sunburn.

Does a suntan protect you from sunburn? In most cases, no. A tan can offer very limited protection, but no more than SPF4 (the lowest sunscreen rating), depending on your skin type. A tan does not protect from DNA damage, which can lead to skin cancer.

What about the idea that a tan looks healthy? Although there is a cultural association between tanning and outdoor activities, the reality is that in most cases a tan is a mark of damaged skin. It may not be obvious at first, but over time tanned skin becomes more visibly wrinkled and in many cases patchy and discoloured, compared with skin that has been protected from harmful UV radiation.

People of northern European descent have skin that has not evolved to be suitable for exposure to the Australian sun’s intense UV radiation, so a tan is neither natural nor healthy.

Then there’s the myth that UV damage to skin occurs predominantly in childhood. Although babies and young children have more sensitive skin than adults, UV damage to your skin at any age increases your risk of skin cancer.

One of the world’s most comprehensive studies of sun protection among adults monitored 1,600 people in sunny Nambour, Queensland with an average age of 49 and found that those who regularly used sunscreen over four-and-a-half years developed significantly fewer squamous cell carcinomas. Over 10 years, the group applying sunscreen also developed half as many melanomas as the control group.

So sun protection can reduce your risk of skin cancer at any age.

That’s why it’s important to slip (on a shirt), slop (on some sunscreen), slap (on a hat), seek (shade) and slide (on your sunglasses), knowing you’ll be reducing your skin cancer risk while in most cases still getting enough incidental sunlight for good health.

Ian Olver is a clinical professor of oncology, and CEO, at Cancer Council Australia. This story first appeared on The Conversation.