Meet Titanic II: Everything you need to know about Clive’s ark 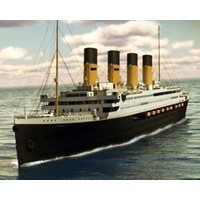 It’s got a similar name, it will look the same, and its owner has declared it will be “sinkable”. But eccentric billionaire Clive Palmer’s Titanic II, under construction in China, will differ in one significant respect from the original: it will have many more lifeboats.

Last night, Palmer addressed journalists in New York to update them on his progress recreating the world’s most famous ship (the project was announced last year, 100 years after the doomed luxury passenger liner sank). It was quite the circus.

One can criticise Palmer’s endeavour as an unseemly attempt to cash in on one of the most iconic tragedies of the 20th century?–?1502 people died?– but it’s hard to deny (my) fascination with his grandiose plans.

Unlike the first Titanic, the ship has a high-tech engine, airconditioning, a hospital and a helipad. Here’s what you need to know about Palmer’s Titanic …

• The Titanic replica (ominously christened Titanic II?–?it’s considered bad luck to name a ship after one that has sunk) will make its maiden voyage from Southampton to New York in late 2016. It’ll follow the same route as the Titanic, visiting Cobh in Ireland before it leaves the British Isles to steam across the Atlantic.

• Titanic II’s guests will have the option of donning early 20th-century clothing, available at no extra charge in their room. They will also be offered the same 11-course menu as that offered to passengers during the Titanic’s 1912 voyage, prepared by 60 chefs.

• In keeping with the Edwardian theme, there will be three passenger classes?– they will not be allowed to mingle. However, passengers can opt to switch passenger class mid-way through the trip. This will require a costume change.

• It’s being built at shipyard in China operated by state-owned CSC Jinling, and has been designed by Deltamarin, a Finnish company. The company that’ll run the Titanic II is called Blue Star Line, a play on White Star Line, which ran the original.

• There’ll be enough lifeboats. The original titanic had 16 wooden lifeboats?–?enough for 1178 of its 2224 passengers and crew. Titanic II will carry 2435 passengers and another 900 crew. It’ll have lifeboats for 2700, and life rafts for an additional 800. “From a safety point of view, it will be absolutely the most safe cruise ship in the world when it is launched,” said Markku Kanerva, the sales director at Deltamarin.

• Apparently 40,000 people have already registered to buy tickets for the maiden voyage, and some expressed interest in paying up to $1 million to do so.

Palmer isn’t displaying the hubris associated with the launch of the first Titanic. Asked if the ship was “sinkable”, Palmer responded it certainly was. “Anything will sink if you put a hole in it,” he said.

At least passengers don’t have to be scared of icebergs. “One of the benefits of global warming is there’s not as many icebergs in the North Atlantic,” Palmer said.

How much has it cost Palmer to build? He won’t say. “It’s not about the money… I’ve got enough money for it, I think that’s all that matters,” he said. According to BRW’s annual rich list, Palmer is Australia’s eighth-richest person, with a fortune of $3.85 billion.

Palmer is making a further announcement, with more details, on March 2 at The Ritz in London. We’ll keep you posted.