Why Barcelona is the answer to our productivity problem 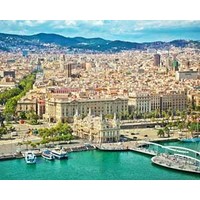 I have been wondering when Australia’s managers are finally going to speak up. They can’t communicate, apparently, and report after report is telling us managers are the reason this nation has such pathetic labour productivity rates.

My answer to such an accusation? Give me a city like Barcelona to be a manager in, and I’ll show you productivity!

OK, I know that Spain is an economic basket case, with 25% unemployment, but that is not what I am talking about. What I mean is this: many of us would jump at the chance to live in Barcelona because it has what we all want from a city: energy.

Imagine if everyone in your office came to work tomorrow full of energy, buoyed by the excitement they find every day in their neighbourhoods: the street stalls selling home-cooked snacks or fresh ingredients, the pedestrians and cyclists weaving through streets devoid of static traffic, the promenades and conversations: in short, the simple pleasures of life.

What if we were not collapsing under the weight of our own fat, congealed from sitting all day in our offices, sitting in our cars in the evening, and our couches at night. Imagine if we were lured into our nightly walk by the bustling activity of our local streets, not by the threat of our impending plunge into chronic disorders.

We might stroll around a piazza just for the fun of looking at the crazy new apartments with their unusual façade, or the chance to nod at the woman who sells flowers, or to see if the handsome gent who was there yesterday at 5ish is there again today.

So much is known, both theoretically and instinctively, about what makes a city a wonderful place to live, one that breathes energy and contentment into its populace, and yet we continue to design exactly the opposite.

It’s partly the way we talk about it. Instead of saying we are going to mandate building medium-density housing, let’s say we are going to build little Barcelona by the Yarra, or the Milano quarter. But, unlike the developers who are all too good at sugar-coating disappointment, we have to deliver on these dream by designing places that foster our energy and thrive on our differences.

It’s partly the way we don’t talk about it, too. I cannot understand why every leader of every company of every size is not deeply immersed in understanding how to create cities that thrive, that are full of fresh food, fresh air, culture, community and exchange. These are the cities that have an economic future. These are the places where problems are of a human scale, and so are the solutions – a bike, a local shop, a romantic laneway.

Let’s start talking about the design of our cities. Let’s make our cities about people and watch the productivity of our people swell along with their happiness and their health and their humour.