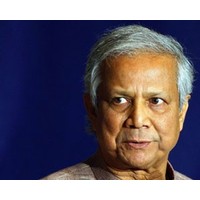 Muhammad Yunus seems to relish listing the ways the Grameen Bank is the opposite of a conventional bank.

It lends predominantly to poor, rural women. It has no paperwork and no lawyers. It accepts no collateral. It has no city offices. It is owned by its depositors.

“When we needed procedures and processes, it was easy,” he says. “We just looked at what the conventional banks did, and we did the opposite.”

Yunus has an uncomfortable experience with banking. When the former economics professor and 2006 Nobel peace-prize winner tried to start up micro-lending – the practice of lending to the poor small, collateral-free amounts to help them improve their position – he went to a traditional bank.

He didn’t have much luck.

After Bangladesh’s Liberation War ended in 1971, Yunus returned to his native Bangladesh after a period teaching economics in the United States. “It was very poor, Bangladesh, after the war. But it was enthusiastic. I could see it in my classes.”

“And then, it got worse. People were dying of hunger. And here I was teaching these theories, but I felt empty. If they were useless, I was useless.”

Yunus began to spend time in the village near his university, as a way to make himself feel more useful. He did chores, and in the process, learnt a lot about how the village worked.

And then, he saw the misery and torture caused by the loan sharks in the village – what fills the gap when respectable banks are lacking. “I couldn’t believe people could be so heartless. For such small loans. And I thought, I can’t solve this everywhere, but I can solve it here. I could lend the money – they should come to me.”

Yunus leant $27 to 42 people in the village. “I didn’t think it was fantastic. I just thought, these 42 people wouldn’t have to go to loan sharks now.”

“But they looked at me like I had performed a miracle.”

Yunus kept lending money. And he kept being repaid.

There was a bank at his university. Maybe, Yunus thought, he could connect the bank with the village.

He went to see the bank manager, and was told poor people weren’t credit-worthy. Yunus didn’t give up. Neither did the bank manager. But eventually, he sent Yunus to the regional office, to his boss, who passed Yunus onto the bank’s head office.

Yunus continued to argue with the bank that it should lend money to the poor in the village. But they wouldn’t relent.

“In that time, I learnt a lot about banks,” Yunus says wryly. “They only lend to people who already have money. It’s a very funny institution. They laughed at me. And I laughed at them.”

Eventually, the bank agreed to lend money to the villagers if Yunus acted as a guarantor. He did, and as the money kept being repaid, the requests for loans grew larger. The bank grew worried, and began to refuse to issue new loans.

Yunus then hit upon the idea of starting his own bank. It would take him another three years before he received regulatory approval.

Finally, in 1983, the Grameen Bank was born. It soon expanded far out from the original village near the University where Yunus had started, operating in villages all over rural Bangladesh.

But poverty wasn’t the only thing Yunus was trying to fix. “In Bangladesh, 99% of bank borrowers are men,” he says. For good reason. No bank manager would take a woman trying to take out a loan seriously. “’Why don’t you bring your husband in so we can discuss this’, they would say.”

Yunus decided half his borrowers would be women.

At this stage, students from his university were working with Yunus. They started to complain, saying the women were afraid to take the money.

“They said things like ‘I don’t know anything about money. Give it to my husband, he handles the money.’”

Yunus told his students not to pay any attention. “I told them, ‘When a woman says she’s afraid of money, it’s not her voice, it’s history’s voice. The moment she was born the family was in mourning. She’s never welcome, just tolerated. That’s how she grew up. You can’t just undo that overnight’.”

“We had to be patient. I thought if one or two women agree to take a loan, then the others will get curious, and that will start the process.”

It would take the Grameen Bank six years before half its loans were given to women. “While we celebrated, we noticed something. The money we gave to women was more effective. It did more good to the family.”

The women the Grameen Bank lent to managed it very careful. They took no risks – starting small enterprises that would be sure to make them a tidy profit.

“The men were over-confident. But anything the women earned went straight to the children. The women always wanted to build for the future. They were terrified they’d lose the money and then no one would trust them again. But the men, they wanted to enjoy the money now.”

Seeing this, Yunus questioned the whole idea of a 50/50 split. He decided the bank would focus only on lending to women.

“Many good decisions were made in building Grameen Bank. But of all our decisions, that was the best. Today, we are a bank for poor women.”

To do this effectively, Grameen Bank staff don’t sit there waiting to be approached.

“When you go to a bank, you convince them you are trustworthy. We reversed that. We go to the people, who tell us they don’t know anything. They’re our people. We build her confidence in us. But we give no suggestions. They have to come from her.”

Today, the Grameen Bank has $US1 billion in deposits, and makes loans worth $US1.5 million a year. Its owners are its creditors – the poor women who opened deposit accounts with the bank when they received their first loan. They receive a dividend, and have continued to employ Yunus as the bank’s CEO.

Every branch of the Grameen bank is self-sustaining – it relies on loans being repaid to be functional. Yunus calls this a “social business’ – a business in which profits go back to achieving its original purpose and created, not to make money, but to solve a social problem. Yunus says this is preferable to charity.

“Philanthropy is good. It has a purpose. But the money goes. And it doesn’t come back. We solved the problem with a business, and then it does come back. It’s self-perpetuating.

“Whenever I see a problem, I create a business to solve it.” Yunus has had a hand in creating over 60 companies, which aim solve many of the problems in Bangladesh. For example, Grameen Shakti offers cheap solar panels to Bangladeshi villagers, and to date has installed several million.

Yunus has also teamed up with Western corporations to help them build their own social business. A joint venture with running shoe brand Adidas has seen the company offer cheap, environmentally-sustainable shoes for 1 euro in Bangladesh. Another joint venture with French food multinational Danone makes cheap, supplement-enriched yogurt sold in Bangladesh. Grameen Intel provides cheap computers and other IT infrastructure to hospitals in poor countries.

With social business, Yunus thinks he’s found his next big idea. It’s what brought him to the Australian Business Chambers Forum, where he spoke recently. And, it seems, some important companies are finally listening.

So are those in government. Cities in Italy, France and Japan have announced themselves ‘social business cities’, where every company operating in the city is encouraged to set up some self-sustaining social business to solve a local problem.

Yunus says if today’s leading companies chose to, they could alleviate or eliminate many of the world’s greatest problems through social businesses. He’s hoping they do.

“Our responsibility is clear”

Yunus goes back to the villages of Bangladesh sometimes to meet the women Grameen Bank has helped over the years.

“I meet a daughter. She looked like her mother, who showed me proudly around the house, showing me the improvements. Then I talked to the daughter, who was now a doctor in the next village. The thought crosses my mind – her mother could have been a doctor. But she never went to school. She doesn’t know how to write her own name.

“Together, we built the system that perpetuates poverty. So our responsibility is clear.”

Muhammed Yunus was speaking at the Australian Business Chambers Forum in Melbourne.