When comparing innovation leaders between countries, a study (of US registered patents since numbering began in 1836) offers some surprising results. As far as being both innovative and having the most patents filed, Taiwan comes out on top, ahead of the others in the top five: Israel, US, Denmark, South Korea and Japan. 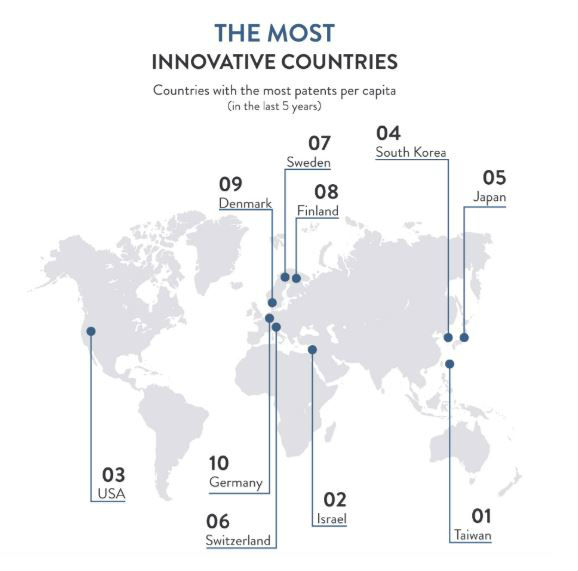 Australians are pretty inventive, though we didn’t make Forbes’ 2018 list of the top 100 innovative companies. Forbes’ method is predicated on what they call the ‘innovation premium’, in other words, investors’ hunches based on different companies’ capacity to come up with profitable new growth.

The Martin Prosperity Institute’s 2015 global creativity index had Australia on top — their measures are more to do with talent, technology and tolerance.

Types of patents and top technology

Million of patents (in the form now used) have been lodged. They constitute several types: utility, design, plant and reissue (the latter to correct some mistake in the first patent issued). Utility patents are the most common, making up 91% of patents issued. These relate to the creation or improvement of a product, process or machine. Design patents (about 9% of those granted) cover the ornamental design of a functional product. Plant patents have to do with the finding of a new species of plant.

The researchers found the top five groups of technology patents since 1963 are for drugs and treatments, organic compounds, synthetic resins and natural rubbers, multiplex communications and chemistry. The top ten are shown below. 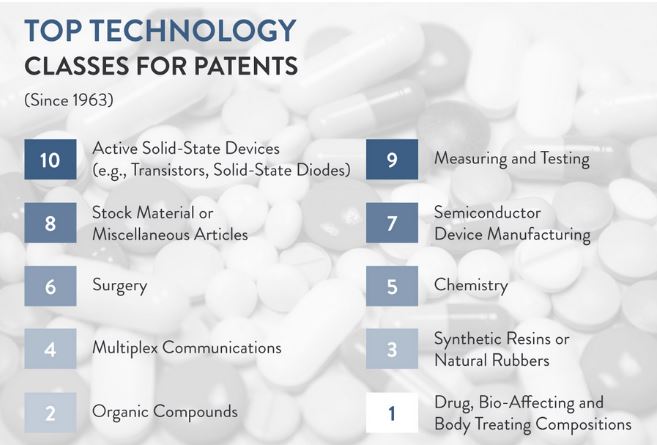 Who are the top innovative companies?

Despite popular perception, it’s not just up to the Elon Musks to be ingenious. The capacity to come up with incremental and far-reaching ways to improve our lives extends beyond individuals.

While individuals do file for patents, the top five companies with the most patents issued in USA in 2017 were IBM, Samsung, Canon, Intel and LG.

Google, Microsoft, Apple and Amazon are also in the top 20. 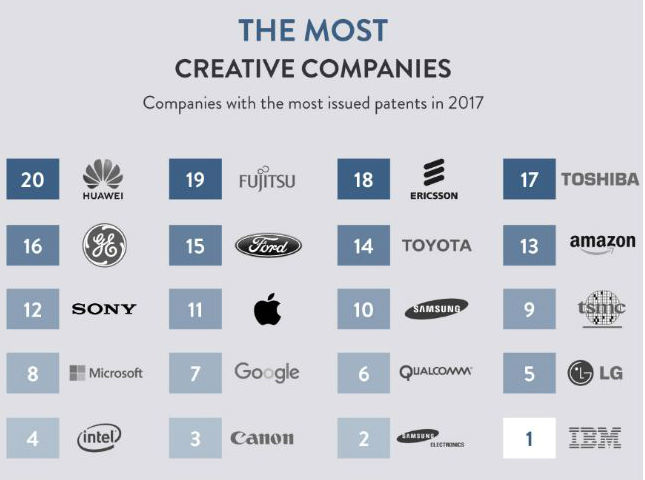 What the Kempler study says, in part, is that a longstanding test of innovation leaders is the degree of marketplace uptake of inventions and how they play out commercially. A perennial reality both nationally and globally is the necessity of filing a patent to legally safeguard an innovation’s intellectual property against copycats (some call this a losing battle).

Patents only granted half the time

On average, in the US, patents are granted 49% of the time, and an interesting 51% of applicants born abroad are likely to receive patents compared to 49% of American citizens. There are also American states where it’s comparatively easy to file a patent for an invention.

Are there lessons for Australia in any of this?

Some believe in the need for caution when it comes to ‘innovation theatre’.  Quite a few startups like to spruik the creativity of their people, output and processes. The measure of innovation does not just lie in profit or making noisy claims about your company’s innovatory qualities. Equally, filing patents (a time-consuming and costly business) establishes certain markers in the territory, while not of itself being a sufficient condition of creativity.

Some believe that for Australia to up its rate of innovation, more investment in research and development (R&D) is needed by the government.  Australia 2030: Prosperity through Innovation recommends more targetted R&D investment and equipping all citizens with skills that see us profitably and creatively into the future.

Let’s give credit where it’s due. Let’s promote less talk and more follow-through action where it counts. We need rigorous studies of the marketplace and research of the protections that exist.

We must recognise mistakes are an essential step towards learning and management must develop an innovation culture by continuously educating, building skills and investing in its people to ensure ideas and enthusiasm flourish.