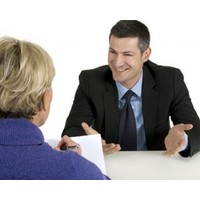 How long does it take to know if someone’s right for the job?

Wanting technology experts with far more than book learning, the company recently trialled a new program in which it put potential employees through a five-day interview, where they joined a working team doing local fieldwork.

Five days is a long time, and for business executives, Eltridge said he could be convinced to speed up the process to three days. But he didn’t want it to take less than that.

“We made a couple of lead-in interviews to give a taste of what we’re trying to achieve here and why we think it’s important, and I think the people who value that way of working will absolutely sign up for three days. I know I would,” he said.

“It’s a small idea that I think will have some pretty big impacts across the organisation.”

For large companies, recruitment is a multifaceted and complex process. Potential employees are put through rounds of interviews, psychometric testing and detailed background checks.

But this doesn’t usually draw out to what is effectively a five-day work trial, says Brendon Booth, a director of recruitment company pb Human Capital.

“In Australia, this is about the most involved thing I’ve heard about.

“The only other thing is investment banking interviews, where the final interview is normally held at a pub, to see whether they can stand working with you.

“It reminds me of that movie, The Internship, about how Google recruits. But you don’t tend to hear that kind of stuff in Australia.”

Booth says there’s always a benefit to meeting people before hiring them, which is a large part of why interviews have persisted for so long as a recruitment technique.

“But in my personal experience, having conducted thousands of interviews over the years, they’re a pretty tired and out dated means of judging a candidate. Plenty of candidates are just really good at interviewing, but not very good at their job, and vice versa.

“Any opportunity to see a candidate perform in the role is going to be beneficial.”

But this gets difficult the more senior a candidate gets, or depending on how niche their skills are.

“I can’t see how this would work for say… procurement experts, which are hard to find,” Booth says.

He adds that the best candidates are often already employed elsewhere, and getting them to give up a week of their holidays to try for another job will weed out many suitable applicants.

“In IT roles, you put an ad up, and you’ll get hundreds of applicants. Many of them will have relatively little experience, and so will be willing to go to that level to differentiate themselves. Eltridge wants to expand that to other areas of Telstra, and that’s great, but it’ll also get far more difficult.”