The inspiring story of a multimillion-dollar disruptive innovation 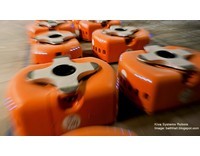 Back in 2003, I spent a good deal of time talking to venture capitalists and hearing nothing but “no.”

I must have explained my new idea to at least 50 prospective investors. It was the notion that, in a warehouse dedicated to picking and packing e-commerce orders, a company could save workers a lot of running back and forth fetching items from the shelves if it had a small army of robots bringing the shelves to them.

This was a solution that wouldn’t have been viable a couple of years earlier, but with emerging mobile robotics it suddenly was – and it had the potential to disrupt the world of material handling. Ten years later, our solution has become a favourite among top e-commerce retailers. Thousands of our bots have been deployed in fulfillment centres by Staples, Gap Inc, Walgreens, Saks Fifth Avenue, Toys R Us, Follett, Timberland, Diapers.com and Dillard’s.

Still, in 2003, even I knew why venture capitalists weren’t biting. They looked at Kiva Systems and saw a company that was complicated, because it was both a software and a hardware business. Software they liked. The part of the solution that scared them was the robots, which required a potentially substantial – and, they thought, risky – investment in engineering and manufacturing hardware.

Ultimately, a private round of funding got us off the ground. But in terms of having to put ourselves in other people’s shoes and allay their concerns about risk, talking to investors was only the beginning: We still had potential customers to persuade.

It’s not about the bot

When management theorists talk about disruptive innovation, they usually focus on the offering. Unfortunately for the would-be disrupter, developing new technology and designing a product that will do a better job for customers are only the first steps. A lot of other work goes into delivering a breakthrough solution.

The idea behind Kiva Systems occurred to me because I had been brought in to rethink a warehouse operation and had seen firsthand the inefficiency of the prevailing model. In a fulfillment center, 60% to 70% of a worker’s day is spent walking among the shelves.

By 2002, it was becoming clear that robots, combined with sophisticated software, could do interesting things. But as it turned out, even an elegant solution with a great return on investment was not enough to close a sale. To understand why, we first had to consider how our primary buyer might see the opportunity. What quickly became clear was that we had to reduce the uncertainty and risk of the investment. The first, easiest way we could do that was in our approach to pricing.