It’s rare to see a company attempting to create an entirely new category of products, let alone one that, if successful, will have long-lasting effects on both a local community and a fast-growing Australian industry.

But that’s exactly what is happening at a farm at Eden Lassie, in Queensland’s tropical dry north, where ASX-listed Top Shelf International has planted hundreds of thousands of agave plants.

The multi-brand spirits company is planning to turn those plants into an Australian agave spirit, the likes of which does not yet exist.

While tequila drinkers will be familiar with the kind of alcohol that can be made from the agave plant, no one has distilled such a spirit on this scale in Australia.

As Top Shelf chief executive Drew Fairchild explains, the yet-to-be-named product will essentially be in “a category of one”.

Top Shelf International was established in 2014 and listed on the Australian Securities Exchange in December 2020, using its initial public offering to raise millions in funding to pursue its expansion plans and develop the Eden Lassie property.

Overseen by an experienced board of directors, led by executive chair and former Swisse vitamins boss Adem Karafili, Top Shelf has attracted interest from a roster of high profile investors, including ASX-listed Australian Whisky Holdings and the investment office of Gerry Harvey’s family.

The company is hoping to tap into rapidly growing global interest in tequila and mezcal, revealing plans to create what it says could be a $100 million export business in years to come during a recent media famil to the farm, which is located south of Bowen.

“We want it to actually be a business that can not only talk to the domestic market, but the international market as well,” Fairchild said during the visit.

The 430 hectare property, inland from the Great Barrier Reef and near the Whitsundays tourist mecca of Airlie Beach, was previously used to farm vegetables, primarily eggplant.

Using sophisticated agronomy practices and drone technology, and drawing on a partnership with the University of Adelaide, the Top Shelf team plan to grow, harvest and distill the agave plants to produce a new spirit that will sit alongside the company’s existing Grainshaker Vodka and NED whiskey — the combined sales of which are forecast to take the company’s revenue to $20 million this year.

If Top Shelf is able to harvest between 200,000 and 250,000 plants a year to make its spirit, it will be in the top 25 tequila or mezcal producers in the world, says Fairchild.

The Eden Lassie farm will have 1 million plants by the end of 2023. Source: Top Shelf International

The use of agave plants to produce tequila is heavily controlled in Mexico, which means the spirit produced by Top Shelf cannot be called tequila. And so taking the new product to market will therefore involve educating Australian consumers about what an agave spirit is, not to mention choosing what to call the product.

But as head distiller Sebastian Reaburn explains, it also means there is much more room for experimentation and innovation in both the harvesting and distilling processes.

Agave plants are generally grown for at least four years before being harvested, however, the Top Shelf team are using drones with sensors to finely monitor the health of each and every plant at the farm, to ensure they are harvested at the right moment.

Collecting this data means the Eden Lassie farm team will be able to harness the local conditions to produce the best quality product, while also working in the most efficient way possible.

And the use of data has another key benefit too: eventually, every customer that purchases Top Shelf’s agave spirit will be able to track their exact bottle back to the very plant that produced its alcohol.

Reaburn and the Top Shelf team are taking an innovative approach to what has been, until recently, a heavily concentrated and mature market.

In 2019, approximately 1.1 million litres of tequila, mezcal and agave spirits were sold in Australia, with retail sales totalling approximately $119 million.

Of those sales, an estimated 70% is dominated by just four brands, whereas in the US, the arrival of more independent operators is starting to break up the market concentration. 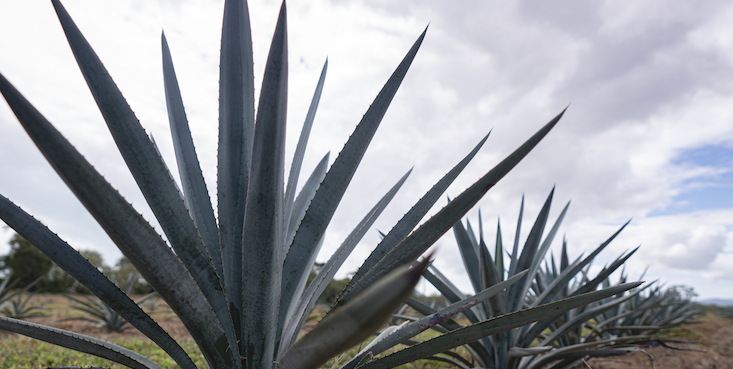 The local market increased by an estimated 30% in the last quarter alone and Raeburn says the demand comes from the fact the spirit is so unique.

“Because it is this incredible expression of place, [and] because there really isn’t a plant like it,” he says.

The first batch of Top Shelf’s agave spirit, produced from an agave plantation at a nearby site, is expected to be available across the country before the end of the year, and plans are being developed for a $25 million distillery and visitor centre to be built at the Eden Lassie farm.

The facility, which will include a tasting room, eatery and conference centre, will also be billed as a tourist attraction, bringing visitors from across the country and adding to the increasing focus on land-based tourism experiences in the Whitsundays region.

SmartCompany travelled to the Whitsundays as a guest of Top Shelf International.