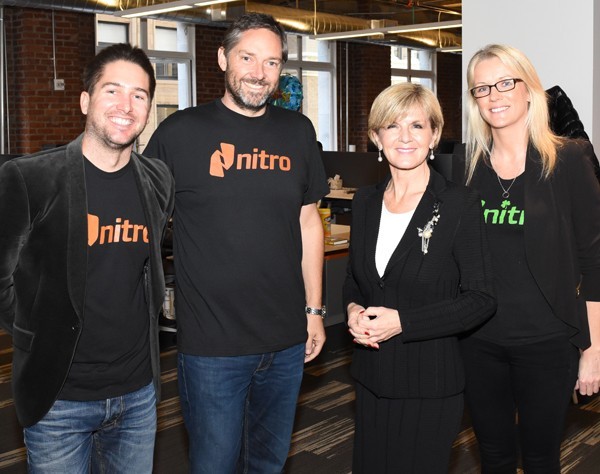 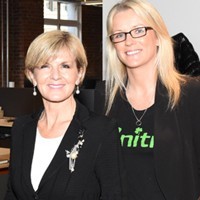 Australian Foreign Minister Julie Bishop has met with a group of Australian entrepreneurs in Silicon Valley to discuss the various challenges and opportunities that surround the startup ecosystem.

The roundtable took place at Nitro’s headquarters, and Nitro founder and CEO Sam Chandler says it proves the new Turnbull government is serious about its commitments to place a strong emphasis technology and disruption.

“More than anything else it gives those of us that’ve been following the change in administration a lot of confidence that these guys are walking the walk, not just talking the talk,” Chandler says.

“We feel like this administration has a certain amount of sophistication with regards to the startup economy. We all have very high hopes. It’s early days but the early signs are positive.”

Chandler moderated the discussion, and says Bishop didn’t come in with a set agenda.

“To have the foreign minister come to Silicon Valley and visit us and other companies with no reason or objective other than to learn is really positive,” he says.

The discussion covered a “whole range” of issues, centred mainly on education and economy policy, and the key differences between Australia and Silicon Valley.

“They’re the two things that we are deficient in right now – we’re not competitive,” Chandler says.

“It’s far too difficult to terminate employees in Australia in a startup where you might only have financial runway for several months. If it takes several months to fire someone the company could be dead by the time that process is concluded.

“The current employee share scheme excludes larger startups like Nitro and that’s patently ridiculous. Although that’s not her portfolio she acknowledged it’s a little crazy.”

Conversation also turned to STEM education and the stark gender gap that exists among graduates, and the startup ecosystem as a whole, as well as what can be learned from startup policies implemented in the likes of Israel and Ireland.

“We haven’t had this sort of engagement with prior administrations,” he says.

Bishop’s San Francisco trip also saw her visit some of the biggest tech companies in the world, including Microsoft, Twitter and HP, as well as the Stanford Graduate School of Business.

The sentiment among all the Australian entrepreneurs was very similar, Chandler says, and based on the same challenges and hopes for the future.

“What struck me was the alignment between all the Australians in the room,” he says.

“We all had very, very similar views about what needed to be done, and that’s a cool thing.

“Everybody was echoing the same thoughts and what was really great was everyone was optimistic about the new administration.”