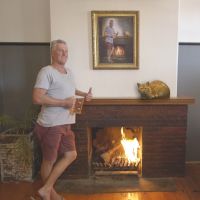 The Tatura Hotel is asking the internet for help.

Peter “Bugs” Ryan, who owns the regional Victorian pub 167km north of Melbourne, has appealed to punters across the world with a viral video to promote his crowd-funding campaign, which will allow them to name anything in the pub for the right price.

Ryan launched the Indiegogo campaign after admitting the businesses couldn’t fund the hotel’s latest round renovations, including fixing its guest balcony, outdoor bar and guest rooms, and putting in a play area for the kids.

“It wasn’t so much that we ran out of money so much as we’d come to the end of our spend,” Ryan tells SmartCompany.

The hotel had already spent nine months renovating the service area and the bistro, but found there were few more areas for improvement.

“We said what do we need to do to keep improving the business and bringing people in?” says Ryan.

“You can’t just sit back and wait for people to walk in the door anymore in small country town of 3,500 people, you’ve got to keep coming up with these ideas and we just though this was a funny way of promoting the hotel and the town.”

Accompanying the campaign is a YouTube video that puts forward Ryan’s case and offers ‘the internet’ the chance to name anything from the chicken parma to the men’s toilets in exchange for a few bucks.

The campaign has already raised $12,000 in one day alone and the video has been watched nearly 130,000 times since being published last week.

For $100 punters can claim their own bar stool, while a band stage still remains up for sale for $2500. Investors have already paid $500 to secure the men’s loos and snap up the parma for $1000.

Ryan says anything is up for sale and he is open to people’s imagination, having taken a bid this morning from someone who wanted to buy the mantle that features in the video.

Ryan says his nephew, who works in advertising in Melbourne, came up with the idea and shot the video.

“I was sort of expecting it might attract some people from Melbourne to come down and spend some time in town,” he says.

“But what I’m surprised by is how far and wide it’s gotten. We’ve had people form Sweden, Philadelphia and Dublin get in touch. It’s all good as long as it creates business in the town.”

“You can make a quid but the cost of running a business or farm, the overheads get you as soon as the money comes in.”

Nicole Matejic, author of the book Social Media Rules of Engagement, told SmartCompany the video taps into a very strong and authentic message, which especially resonates with regional communities.

“It’s a very innovative and creative way to say, hey, things haven’t panned out the way we thought, but we’d love to keep serving you so chuck a few bucks our way and we’ll buy you a beer – what’s more Australian than that?” says Matejic, who grew up 20kms from Tatura.

Matejic says even though the campaign could potentially be promoting a bad business decision, as the pub has run out of its own money, it does so in a humorous and authentic way.

“[Ryan] has played the Aussie larrikin really well and people are endeared by the country battler doing it tough,” she says.

But Matejic warns other brands considering the same sort of approach should be aware not to just “jump on the bandwagon” of a successful campaign.

“This is a hard act to follow,” Matejic says.

“He has a lot of goodwill built up in the small town community. Other brands considering jumping on the bandwagon should be aware they may not have that karma bank of goodwill… The people of the Goulburn Valley will be talking about this for a long time to come.”