Big Money: What Turkey’s got going for it 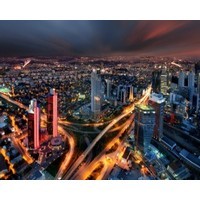 As I landed in Istanbul to cover the Dell Women’s Entrepreneurship Conference on Sunday, the central parts of the city still smelt of tear gas.

But as I left on Wednesday night, Turkey filled me not with a sense of unease, but a sense of optimism.

It’s impossible to spend any time in Turkey without being struck by what the nation has going for it.

Most of the population is under 35. The economy is growing strongly – it’s currently the 16th largest in the world. Most of the companies in Turkey (80%) are family businesses, which leads to Turkey having a higher rate of women leading businesses than Europe.

And if the experiences of one entrepreneur I heard are anything to go on, Turkey welcomes foreigners setting up shop.

Elena Pallotta decided the only way to be happy was to become an entrepreneur. She loved ice cream and discovered Turkey had relatively little of it, so she opened up an ice cream shop in Istanbul. She now has three.

“Since 1960, Turkey’s signed 19 standby agreements with the International Monetary Fund,” she said. “But the last 10 years have seen incredible growth – almost double-digit growth. It’s a country where the population is getting richer, and the middle class is growing.”

When Pallotta set up shop in Istanbul in 2011, she had only spent a few months there. Her partner, who was meant to be bringing the capital, turned out to not have the money he’d promised.

She’d already spent the money she thought he had. And so, she was in trouble.

She had one friend in Turkey she knew from an MBA program she did a few years earlier. He put her in touch with his friends, who began advising her on how to save her business.

“Turkish people are really welcoming,” she said. “I’ve experienced incredibly sympathy. Somehow, they love the idea of a foreigner successfully doing business in their country. I’ve received help from places where I didn’t expect it… I had successful entrepreneurs, executives, senior partners at major firms all give up their time to help me.

“I remember the general manager of a very large Turkish brand sitting with me for an hour with a map, telling me what locations would be good to open in.

Has it been difficult to set up a business as a woman? Not at all, Pallotta said. This bodes well for the country. It makes it a good place to do business with.

My experience of navigating Turkey was much smaller, but also encouraging. You can’t judge a country by its tourist districts. But on my final day, I did something that millions of Turks do every day. I used the metro.

I had time to kill. So when I checked out of my hotel, I asked reception what was the cheapest way to get to the airport. He said it’d take me an hour by public transport.

I ended up having to take a tram before changing to a train. The system was far less bewildering than it is in Melbourne. Ticketing information was clearly marked in several languages, buying a ticket was easy, people were forthcoming with directions even before I asked them (though sometimes they’d discover I didn’t speak the languages they knew and so they’d ask around for someone who did), and the whole trip went smoothly, even though we were packed in like sardines.

Even at its most revolutionary time in decades, Istanbul just seemed to work.

Myriam Robin travelled to Istanbul as a guest of Dell, which paid for her flights and accommodation.