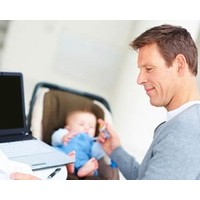 The arrival of Yahoo CEO Marissa Mayer’s baby on September 30 has returned pregnancy, working parenthood and maternity leave to the forefront of debate. I have mixed feelings about this.

Mayer’s situation is extremely unusual. A short maternity leave may be relatively easy for her, in part because she and her spouse are very wealthy and because, as CEO, Mayer has considerable discretion about how to spend her time. This is not the case for most working women – or most working men.

And yet, the fact that Yahoo’s board agreed to hire Mayer as CEO while she was pregnant is a sign of real progress for both men and women. The decisions made by the board and by Mayer signal something important to us all: greater freedom.

This episode is but one highly visible example of the many new options available to people as they struggle to pursue lives that fit with their most precious values. The choice that Mayer made wasn’t simply a result of her financial wherewithal; it had to do with the fact that it is now socially and culturally acceptable, at least in the West, for a woman to have a child while taking on a high-powered executive position. Even five years ago this was not the case.

We’re going to see the emergence of more alternative career paths, if my research on business school students at the University of Pennsylvania’s Wharton School is any indication.

In 1992 we surveyed over 450 Wharton students at the moment they graduated. Then, this past May, we asked the same set of questions of the Wharton undergraduates in the class of 2012. In part, the surveys explored attitudes about two-career relationships. We asked students to what extent they agreed with these two statements:

— Two-career relationships work best when one partner is more advanced than the other.

— Two-career relationships work best when one partner is less involved in his/her career.