The 50 most innovative companies of 2016 revealed

Global business consultancy firm Boston Consulting Group has released its list of the world’s most innovative companies for 2016, with tech darlings dominating.

While a number of positions on the list are filled by the usual suspects, many of the notable movers and shakers include younger companies like Uber and Netflix. Sadly, no Australian companies make the cut.

The group judges a company’s level of innovation via a survey of senior executives across multiple industries worldwide, who are asked to rank the most innovative companies both in and outside of their industries. The consultancy firm also analyses three key financial metrics: total shareholder return, revenue, and margin growth.

Topping the list are regular players in the innovation game, with the first five spots on the list taken by Apple, Google, Tesla, Microsoft, and Amazon. Tesla’s inclusion on this list is the most surprising, with the cutting-edge auto company jumping a long way since it ranked 41st in 2013.

Rounding out the top ten are Netflix, Samsung, Toyota, Facebook, and IBM.

Innovation and the technology sector have always gone hand in hand, and BCG’s rankings firmly cement that. Not only are six of the top ten most innovative companies within the tech sector, so are 15 of the 50 listed companies.

The second most frequently appearing areas are the automotive and industrial products sectors, both with seven companies respectively represented on the list. The third most represented industry is transportation and travel, with six companies making the cut.

In 2015 Prime Minister Malcolm Turnbull unveiled his $1 billion innovation agenda, and told the Australian Financial Review “innovation is about so much more than technology start-ups”.

However, given the number of both start-ups and technology companies within BCG’s list, it’s clear that senior executives across the globe may not entirely agree with Turnbull’s statement.

Fresh faces from the start-up world

Ten companies have made it into BCG’s list for the first time in 2016, and nearly half of them are start-ups, according to Boston Consulting’s definition of “a private company founded after 2001”.

Top of the list of newcomers is ride-sharing start-up Uber, coming in at 17. Closely following at 21 is start-up darling and accommodation renting service Airbnb.

BCG tracks which companies have jumped ten or more places in the ranking since the 2015 compilation of the list. Jumping nearly 20 places in 2016 is social media giant Facebook, rocketing from rank 28 to rank nine over the course of a year.

Check out the full list of innovative companies below. 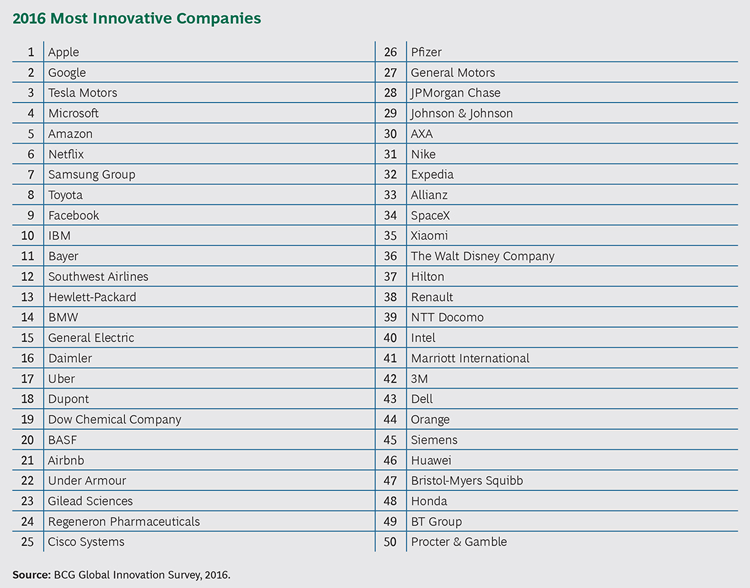