‘It will wipe me’: Sydney ugg boot manufacturer ordered to pay $650,000 for selling 12 pairs of boots into the US 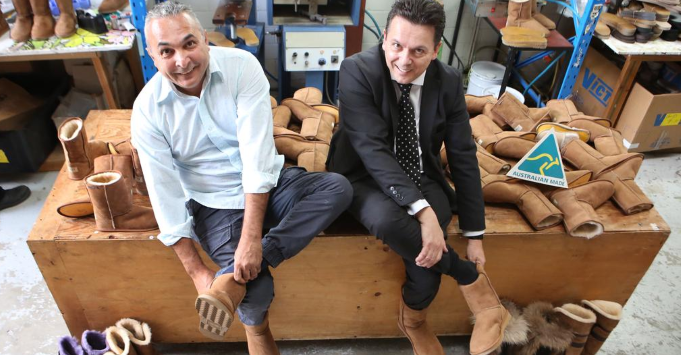 A Sydney business owner has been ordered to pay nearly $650,000 in damages to an American multinational after it sold 12 pairs of ugg boots into the US between 2014-16.

The ruling is the result of a long-running legal battle between local ugg boot manufacturer Australian Leather and $6 billion US footwear company Deckers over the Aussie company’s use of the term ‘ugg’.

Deckers owns the trademark for “UGG Australia” in more than 130 countries, bar Australia, however, its stringent defence of the trademark prevents Australian companies from selling their goods internationally, costing small businesses millions in sales each year.

This is despite the ugg boot being an Australian and New Zealand invention, with many associating the shoe with the countries.

Founder of Australian Leather, Eddie Oygur, said he would fight the case when he was first sued by the company in 2016, and garnered support from then-senator Nick Xenophon, who claimed the term ‘ugg’ should be protected in Australia in the same way the term ‘champagne’ is protected in France.

However, the small-business owner lost the case, with an eight-person jury finding Oygurs’ company had willfully infringed on Deckers’ trademark by selling 12 pairs of ugg boots and two pairs of socks, worth some $2,000, into the US over the two-year period.

Four pairs of those boots were purchased by a private investigator hired by Deckers.

The business has spent more than $1.25 million on legal fees fighting the case already and could face further penalties when Deckers’ legal costs are taken into account. In a statement, Oygur said the verdict was “devastating” and called for support against the “corporate bully”.

“To say this verdict is devastating would be an understatement. My life savings have already gone into this case, and unless Australians get behind me this verdict will wipe me, shut my business down and destroy the Australian ugg boot industry,” he said.

“I fought this, against a $7 billion US corporate giant, because I passionately believe ‘UGG’ belongs to Australia, for any Australian company to use to make ugg boots for the world.”

The business owner is seeking donations from Australians to help appeal the decision, after requests to the Prime Minister, Attorney-General, and the ACCC for help all went unanswered.

“I stood up to this corporate bully because I believe Deckers should never have had the right to trademark UGG in the first place because it’s a uniquely Aussie term for sheepskin boots and should belong to Australia,” Oygur said.

“I will keep fighting this, all the way to the US Supreme Court if necessary, because it’s the right thing to do for Australia.”

In a statement, Xenophon, who now works as a lawyer and travelled to the US to help represent Oygur, said the government refused to help the SME because it didn’t deem the issue important enough.

“It seems that the possibility of generating thousands of local manufacturing jobs as well as significant export sales, was not seen as an important issue for the current government,” he said.

“Now is the time for our political leaders to get involved and fight for the Australian ugg boot industry.”

Speaking to SmartCompany, lawyer and IP expert Olivia Hitchens said while the result was disappointing, the Australian business was unlikely to win, as the period to oppose Deckers ‘Ugg Australia’ trademark passed when the company acquired it in 1995.

She believes the term ‘ugg’ should be protected much like the terms ‘champagne’ and ‘feta’, but is unsure if the current or next government is likely to champion the cause.

“Moving forward I think we should look at legislation to protect iconic Australian brands, however, it’s not going to help in this situation. It’s unfortunately too late,” she says.

Hitchens says Deckers’ use of ‘Australia’ in their trademark ‘Ugg Australia’ is also “completely misleading” considering the boots are not made locally, and says the company shouldn’t be allowed to sell its products here under that branding. However, that decision is reliant on action from the ACCC, she says.

“I’d love for them to be successful, but it’s such a lot of money to continue to appeal, and unless there’s a new point of law to be found, it’s unlikely,” she says.

“I couldn’t predict any likely success.”

The significant damages paid by Oygur, which equates to more than $53,000 per pair of boots, is a “huge amount”, and Hitchens warns other SME owners over unintended trademark infringements when selling into other countries.

“For businesses selling online who sell broadly into other countries, this is a risk as you might sell somewhere you don’t have the trademark to,” she says.

“Small businesses often can’t afford to register their trademark in every jurisdiction.”

SmartCompany contacted Deckers and Australian Leather but did not receive a response prior to publication.

A sad day for Australians and Australian business.

Agreed.
It’s really Cultural Appropriation if you think about it.

Don’t do business in the USA …
If you must, rename them Hug Boots – that’s how they feel.
Good luck …

Seek support via ‘go fund me’. And perhaps bring this to greater attention on Charge.org. The question as to whether Deckers should use ‘australia’ as part of the product name is pertinent. Detestable are the big business Bullies.

I’m looking to buy some Australian made woolen boots this winter.

Good on Nick for once again supporting the “Underdog” against the horrible BIG Bully. Pray for the correct result