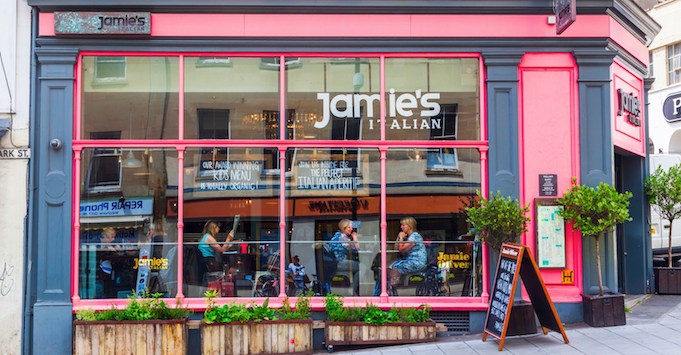 Celebrity chef Jamie Oliver is in Australia this week and had a chance to visit the Parramatta site of his Jamie’s Italian chain, after buying back the Australian restaurants from collapsed hospitality group Keystone in 2016.

The Daily Telegraph reports Oliver met with staff this week, with the chef saying the buyback process has been an “emotional thing”.

In a statement last year, he said the collapse of Keystone Hospitality Group was no reflection of the performance of his restaurants.

“This will be a really exciting moment for me personally, and I know the guys will be ecstatic to be back in-house. It will allow us to invest even more time and money in people and restaurants, celebrate great Aussie produce and be even more creative,” Oliver said.

Six Jamie’s Italian restaurants across the country will continue to trade under Oliver’s ownership.

The Commonwealth Bank of Australia has reported cash earnings of $2.4 billion for the third quarter of 2017, lifting from $2.3 billion in the same period a year ago.

The bank attributed the result to “continued cost discipline” and income growth, with home lending volume increasing 0.8% for the quarter. The result hit expectations, with Business Insider reporting it is now on track for a record $9.7 billion cash profit if the final quarter is as solid.

The financial services and banking sectors are expected to be in the spotlight this evening, with the government tipped to outline measures in the federal budget to improve dispute resolution and competition.

A former contractor for kitchen appliance company Thermomix is reportedly suing the company over claims she lost business without compensation.

News.com.au reports the contractor has taken action against the business in the District Court of Western Australia, claiming that after starting with the business in 2007 and becoming a group leader in 2008, Thermomix changed the terms by which the contractor managed other consultants and received commissions.

However, news.com.au reports the contractor’s lawyer says that while she raised these concerns and continued to work, she was then terminated from her position in 2014.