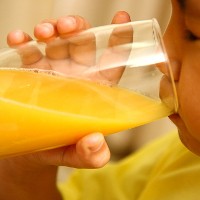 An Australian juice manufacturer and a supermarket supplying its products have been slapped on the wrist by the competition watchdog for allegedly misleading consumers with false advertising.

Supabarn Supermarkets and The Real Juice Company have both paid $20,400 fines to the Australian Competition and Consumer Commission for labels on apple and cranberry juice suspected of contravening Australian Consumer Law.

The apple juice claimed to be produced using “the freshest quality apples” and “made in Griffith” despite being made from reconstituted apple juice imported from China.

The offending labels left a bad taste in the ACCC’s mouth.

The cranberry juice product, meanwhile, claimed to contain no added sugar, artificial flavours, colours or preservatives when it in fact contained sugar and other additives.

The Real Juice Company manufactured and supplied nine flavoured juices to Supabarn under a private label from at least January 2014 to March this year; however, both companies stopped supplying the products following enquiries by the ACCC.

Melissa Monks, special counsel at King & Wood Mallesons, told SmartCompany it was interesting to see the competition watchdog target both the manufacturer of a product and the retailer.

“The commission tends to take action against the manufacturer, so the retailer might have been much more involved in the marketing in this case,” Monks says.

“It highlights how important it is that retailers can’t be complacent – they really need to make enquiries about the stock they’re getting and whether the claims can be substantiated. They can’t be wilfully blind to the product they’re stocking.”

Monks says it is important that companies are aware of previous action taken by the ACCC as there are “very clear enforcement examples” in the past – especially relating to claims around Australian-made or fresh food.

“Fresh is a danger word because marketers want to use it but they need to be very clear about when they can,” she says.

“You see it on so many packages now… from my experience so many clients are itching to use it but we’ve had very clear parameters set on how to use that term in the Coles fresh bread case. It’s a sensitive area and you have to be very careful in the claims you’re making and have the materials to back it up.”

ACCC chairman Rod Sims said in a statement truth in advertising is a “priority area” for the competition watchdog.

“Consumers should be able to make informed purchasing decisions and not be misled regarding the composition of products,” Sims said.

“The claims we say were made versus the reality in this situation are very concerning, particularly given recent controversy over the source of some food products. In addition, false or misleading claims of this kind not only mislead consumers, but can also disadvantage competing suppliers in the market, especially those who are using Australian grown fruit.”

Sims also pointed out businesses at each level of the supply chain are responsible for not misleading consumers through false or inaccurate advertising.

“Both manufacturers and retailers can be responsible for representations made on packaging or labelling of the products they supply, and each level in the supply chain should have systems in place to ensure that their products are compliant with the Australian Consumer Law,” he said.

A spokesperson for Supabarn said in a statement to SmartCompany the company cooperated with the competition watchdog and acted swiftly to remove the offending products from its shelves.

“Once it was aware of the problem Supabarn immediately withdrew the product from its shelves and fully cooperated with the ACCC,” the spokesperson said.

“At no time were Supabarn made aware of the contents of the juice by Real Juice.”

SmartCompany contacted The Real Juice Company but did not receive a response prior to publication.