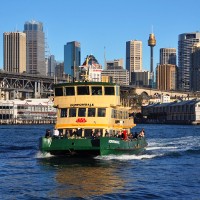 The former chief executive of Sydney Ferries has been handed a three year jail sentence after racking up hundreds of thousands of dollars on the company’s credits cards.

Geoffrey Smith, who was also a former deputy chief of the Royal Australian Navy, pleaded guilty to one charge of cheating or defrauding Sydney Ferries in the Sydney District Court, reports News Corp.

He was accused of using his company credit card from the time he was hired by Sydney Ferries in 2006 to pay for a lavish lifestyle, which included the lease on two BMW cars, family holidays, repayments on a $2 million home in North Sydney, and expensive renovations on the home, including the installation of a swimming pool.

The court heard Smith, who had signed a document agreeing not to use the corporate credit card for personal use, defrauded Sydney Ferries of more than $128,000 between September 2006 and May 2008, but paid back all but $23 of that amount.

Smith’s employment was terminated in 2009 after his fraudulent activity was discovered in an investigation by the Independent Commission Against Corruption in New South Wales.

This week, Judge Michael Finnane sentenced Smith to three years and four months in jail, with a non-parole period of 18 months.

Finnane said prior to joining Sydney Ferries, Smith was a man of “exemplary good character”, having received a number of military decorations and being made an Officer of the Order of Australia.

“In every sense it is a tragedy that such a distinguished man should find himself facing sentence for fraud charges,” said Finnane.

“Clearly his lifestyle far exceeded his income and he chose from May 2008 onwards to engage in active fraud of Sydney Ferries.”

SmartCompany contacted the New South Wales Department of Transport but did not receive a response prior to publication.

Brett Warfield, chief executive of forensic accounting firm Warfield & Associates, told SmartCompany this is one of the “worst cases” of employee fraud he has seen where a senior executive has been approached by various people in the organisation about their credit card usage and had signed a document agreeing not to use a corporate card for personal spending.

Warfield says it is not difficult to detect credit card fraud within an organisation, as long as there is an independent review system in place.

“At that level, [credit card use] should be reviewed by an independent board member before being approved and sent to accounts,” says Warfield.

Warfield says while there is “a large element of trust that comes into play” and chief executives are often expected to “lead by example”, the importance of having a senior member of the organisation review credit card usage should not be underestimated.

An avenue for whistle blowers to speak up about the misuse of company credit cards is also important, says Warfield.

“The people who are processing the accounts might say ‘that’s not right, how is he paying for that’ but they might be frightened to tell someone,” he says.

“They should be able to report it directly to the board or to general counsel, or someone very similar.”

Warfield says there are two important steps any business with corporate credit cards should take.

“Number one, look at how many credit cards are on issue [and] who really needs a card,” he says.

“And number two is restricting what they can be spent on. You need good policies and tell staff about them.”

Warfield also recommends asking an employee to sign an agreement when they are issued with a company card, indicating they agree not to use the card for personal expenditure.

“That should be copied and retained in hard copy,” he says.

KPMG forensic accounting partner David Luijerink told SmartCompany there are three ways in which businesses can manage the risk of fraud: preventing the fraud from happening in the first place, detecting fraud when it does occur, and responding to fraud in an appropriate way.

Luijerink says preventative measures should involve segregating employee’s duties to ensure the same people are not responsible for initiating payments and approving the same payments, as well as training employees.

“Tell them the business has zero tolerance for fraud and if they see something, what they should do and who they can tell,” he says.

Like Warfield, Luijerink says methods to detect fraud should include an anonymous and confidential whistleblowing line, which he says is particularly “powerful” when the fraud is taking placing internally.

He says KPMG is also increasing using data analytics to help clients detect fraud, while comparing the performance of a business over different time frames on a regular basis can also help uncover abnormalities.

Luijerink says businesses should also have clear policies about how to respond in the event a fraud is detected. This includes determining how to assess and retain evidence of the fraud, as well as deciding whether professional support should be called upon.

“Many businesses would have an anti-fraud policy, but this should also be linked to other policies about expense claims, conflict of interest and HR policies,” he says.

Luijerink says three elements are need for fraud to occur—opportunity, motivation and rationale—and businesses will have the most success in addressing fraudulent behaviour by focusing on employee opportunity and motivation.