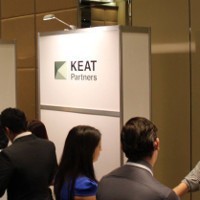 A Keat Partners stand at a job fair (Source: Facebook)

A Melbourne training provider that advertised jobs that did not exist in order to lure potential employees into paying for training or internships with the company has been fined $166,000 in the Melbourne Magistrates’ Court.

Keat Enterprises, which collapsed into voluntary administration in June 2014 after the accusations reached the media, was found to have posted fake ads for graduate accountants and interns on Seek.com.au in order to lure applicants into its unaccredited in-house training.

At the end of the fake job interviews, applicants were instead marketed training courses for work in the accounting industry, at a cost of between $2000 and $3000.

The majority of the ads did not mention any extra costs and those that did mention fees referred to them as “software licensing and CPA mentoring costs”.

At the time of the investigation, Daniel Leong, chief executive of Keat Partners according to his LinkedIn profile, denied all allegations about his business to Fairfax, saying the claims seemed to have originated from “a few disgruntled ex-employees”.

“We are pleased that the court recognised the serious breaches committed by Keat Enterprises; this will serve as a reminder to other employment and training agencies that they will not get away with false and misleading conduct,” Consumer Affairs Victoria’s acting director Phil D’Adamo said in a statement.

“Obtaining compensation for affected consumers was considered in this case, however, due to the company being in liquidation such an order would not have been able to be granted without the leave of the Supreme Court,” said the spokesperson.

“Practically, in the circumstances of this case, there would most likely be insufficient resources to make good any compensation order.”

Keat Enterprises appointed Mathew Campbell Muldoon and Ken Sellers of Sellers Muldoon Benton as administrators of the company on June 3, 2014.

Fairfax reports a liquidator’s assessment from last year showed the company owed more than $65,000 to 15 employees and $160,000 to other unsecured creditors, including nearly $40,000 to the Australian Tax Office.

SmartCompany contacted Sellers Muldoon Benton but did not receive a response prior to publication.

“It’s trying to get people in the door under false pretences,” says Harris, who is not surprised the court imposed the substantial fine.

“If you’re in the business of doing that sort of thing, you’ll be in breach of Consumer Law and closing your doors like this business.”

Harris says a business must consider its conduct from the point of view of the consumer.

“Australian Consumer Law is all about protecting the consumer, so as a business, you need to put yourself in the consumer’s shoes and ask the question, am I telling the full story or am I being misleading? If it looks and feels dodgy and misleading, the choice not to do it should be obvious,” he says.

Harris says Consumer Affairs can generally take action against a company director or senior officer if a company has been liquidated.

The Consumer Affairs Victoria spokesperson confirmed it considers the fines and convictions imposed by the court in this matter have not finalised its dealings with other persons who may have been involved in the operations of Keat.

“As those matters are ongoing it is not appropriate to make any further comment at this time,” the spokesperson says.