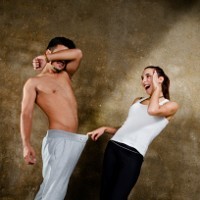 A medical clinic that told erectile dysfunction patients their penises could shrink if they did not seek treatment has been found guilty of unconscionable conduct in the Federal Court.

Justice Anthony North yesterday found the Advanced Medical Institute (AMI) had used hard-selling sales tactics to convince customers to buy its nasal sprays and oral drips for longer-lasting erections, despite the products having no scientific basis.

AMI has previously come under fire for its advertising, which television viewers said implied the men are at fault for premature ejaculation.

The Australian Competition and Consumer Commission brought the action against AMI, alleging the company’s salespeople had made a series of unsubstantiated medical claims when signing customers up to treatment plans, which were in some cases 18 months long.

Among the phrases provided in their training material, AMI salespeople were directed to tell customers untreated premature ejaculation could lead to penis shrinkage, psychological impotence and even prostate cancer.

“Training salespeople to trap vulnerable men into agreeing to treatment programs by the use of high-pressure selling was dishonest conduct,” North said in his lengthy judgment.

“It is immoral to seek to harness the fears and anxieties of men suffering from ED [erectile dysfunction] or PE [premature ejaculation] for the purpose of selling medical treatments. To target the patient’s vulnerability in this way is to use an unfair tactic and that is a possible marker of unconscionable conduct”.

The court heard AMI – which was purchased in 2011 by a company named NRM Corporation, another respondent in the case – turned over close to $55 million in revenue from such treatments in 2009-10 alone.

As a part of Justice North’s orders, AMI chief executive Jacov Vaisman has been banned from continuing in his role in the operation.

North also ordered AMI to pay compensation to 14 affected patients, that the company only offer patients contracts of a maximum of two months, including a five-day cooling off period, and ordered the company to pay the ACCC’s costs.

Rohan Harris, principal at law firm Russell Kennedy, told SmartCompany AMI had fallen foul of unconscionable conduct laws by using hard-sell tactics to take advantage of someone in a situation of disadvantage.

“Any medical issue that a consumer might have, understandably falls into the category of disadvantage,” says Harris.

“Bullying and intimidation is not a legal sales tactic, it’s the sort of tactic that will eventually get you into difficulty, particularly when you’re dealing with consumers in some sort of disadvantage or vulnerable situation.”

Harris says the case shows businesses must make sure sales staff are not making unsubstantiated claims outside of their knowledge.

“These sorts of statement weren’t made by medical practitioners, they were made by salespeople,” says Harris.

“You can’t have a situation where salespeople are making statements about someone’s medical conditions – that is the domain of qualified medical professional.”

SmartCompany contacted AMI but did not receive a response prior to publication.