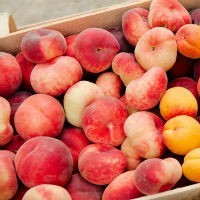 The operators of a fruit and vegetable stall at a market in western Melbourne is facing legal action over allegations they paid a man who came to Australia as an asylum seeker as little as $3.50 an hour.

Mhoney Pty Ltd, a company that ran a fruit and veggie stand at the Sunshine Fruit Market, will face the Federal Circuit Court over the underpayment allegations in November along with its director and part-owner, Abdulrahman Taleb.

According to the Fair Work Ombudsman, the male worker in his 20s originally came to Australia from Afghanistan as an asylum seeker and had spent time in detention before being granted Australian residency in 2010.

The alleged breaches of workplace law took place in 2012 and 2013 and involve significant underpayments of the award rate for such work, totalling an amount of about $25,000 in owed entitlements.

It is also alleged the worker was paid nothing at all over several weeks in 2012.

The company and director could face penalties of $33,000 and $6600 respectively if found guilty of the underpayments, according to the Fair Work Commission.

Fair Work Ombudsman Natalie James said in a statement the employee spoke little English and relied on an interpreter to contact the Ombudsman about his claims.

“The employee should have been paid a little over $17 an hour for normal hours, up to $35 on weekends and up to $43 on public holidays,” she said.

“The employee was being paid well below their minimum entitlements,” she says.

“The employer in this case is liable for a significant underpayment claim in excess of $25,000.

“While the employment relationship continued for a period of around five months, at times it is alleged the employer paid the worker more than $13 below the appropriate hourly rate.”

Aitken says a crucial consideration for the Fair Work Ombudsman in reviewing such cases and considering whether to impose penalties is often the vulnerability of the worker.

“In this case, the Ombudsman has indicated it will be seeking penalties against the employer, and the worker’s status as a former asylum seeker with limited knowledge of English is likely to weigh heavily in favour of such an order,” she says.

Aitken says the case is a timely reminder for other small businesses to review minimum wage rates, determine whether any modern award applies to employees and ensure penalty rates such as overtime and work on weekends are appropriately paid.

“While some consideration may be given… to the limited resources and knowledge of small businesses, ultimately the business will be required to comply with minimum statutory and industrial standards,” she says.

SmartCompany was unable to contact Abdulrahman Taleb or Mhoney Pty Ltd prior to publication.