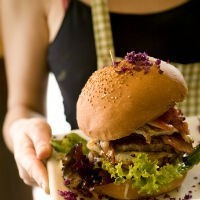 Burger chain Grill’d is being taken to the Federal Court by a former employee who was sacked after she circulated a petition that asked for full award entitlements for herself and her co-workers.

Kahlani Pyrah, who began working at Grill’d Camberwell in June 2014, will also ask the court for her old job back.

Pyrah claims she received a trainee wage of $15.20 when she started with the business, as well as below-award rates when she turned 20 and worked on Sundays.

After receiving advice from her union, the 20-year-old held a meeting with her co-workers to discuss their options and circulated a petition calling for full-award entitlements.

The petition was signed by eight of Grill’d employees.

On June 30, Pyrah applied to the Fair Work Commission. However, 10 days later she was sacked.

An online petition calling for Pyrah to be reinstated has so far received almost 9000 signatures.

Pyrah said in a statement she is asking to be reinstated because her job with Grill’d meant a lot to her.

“I am good friends with my coworkers and I really like working there,” she said.

“I come from regional Queensland and this job allows me to support myself while I study here in Melbourne. I want my job back. I want my workmates to get paid the award minimum and I want Grill’d to respect our right to join a union and speak out. This is supposed to be a democratic country so it should be our choice. But it’s not. Many of my coworkers are just too scared.”

In a statement provided to SmartCompany, a Grill’d spokesperson said the Camberwell store was a small, family owned-franchise and will strongly defend itself against the former employee’s claims, which are “vigorously denied”.

“The owners run a values-based business that prides itself on providing a safe and enjoyable workplace for its employees,” the spokesperson said.

“The franchise partners at this restaurant work hard to make staff and community responsibilities their highest priority. The agreement that applies to our restaurants are legally valid and operative and ensures lawful rates of pay for all our employees.”

“In our experience this kind of underpayment is common and so too is the sort of intimidation and harassment she [Pyrah] has faced as a result of speaking out about the underpayment,” Walsh says.

“For us there’s been a surprising level of outpouring of support by Kahlani overnight. It’s obviously struck a nerve out there with people who work in hospitality and people who have perhaps young people and children in their family working in hospitality.”