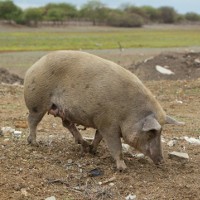 Saskia Beer, the daughter of celebrity chef Maggie Beer, has been accused by the Australian Competition and Consumer Commission of making false or misleading representations about the origins of her company’s pig meat.

The ACCC has previously stung meat suppliers for misleading consumers over the free range nature of their meat, but has cracked down on Beer for the colour of her pork.

Barossa Farm Produce, of which Beer is the sole director, was accused of sourcing meat from white pigs for its ‘The Black-Pig’ smallgoods range, instead of from more premium quality black pigs.

Between December 2010 and May 2013, Barossa Farm Produce made various representations on its product labelling, websites and social media that the pork used in the range was sourced from heritage Berkshire pigs, when that was not the case.

Beer was also accused of making misrepresentations at an autumnal cooking class held at the Maggie Beer Farm Shop in April 2013.

The ACCC has accepted an enforceable undertaking from Barossa Farm Produce that will prevent it from making any misrepresentations about the breed or type of pigs in its ‘The Black Pig’ labelled smallgoods and will require that it knows the origin of every animal used in the production of the range.

Barossa Farm Produce will also be required to publish a corrective notice on its website, and Beer will have to attend trade practices compliance training.

Beer has released a statement taking responsibility and apologising “unreservedly to any customer who has in any way been misled”.

“This is an isolated instance that arose as a result of miscommunication on the part of our supplier and a failure on our part to adequately verify in this instance the source of the product,” said Beer.

“There was no intention to mislead or misrepresent in any way the origin of the product,” she said.

Beer said systems for ensuring compliance had been reviewed to ensure no reoccurrence and said she was committed to providing the accurate and reliable information that her customers expected of her.

ACCC chairman Rod Sims said in a statement false credence claims relating to food products “are a priority area for the ACCC”.

“A business must not make claims about the characteristics of its products when it has no reasonable basis for doing so,” said Sims.

He said the mislabelling gave Barossa Farm Produce an “unfair advantage” in the market, as consumers were likely to seek and pay more for products with specialised ingredients.

Hall and Wilcox partner Sally Scott told SmartCompany a credence claim is a claim or representation about the characteristics of a product, such as place of origin, free range and environmentally friendly.

Scott says any business making a credence claim needs to ensure that the claim is not misleading and should consider not only express statements, but also implications.

“The ACCC has pursued similar cases to this in the past, including cases involving misleading claims about ‘King Island’ products and free range eggs and chickens,” says Scott.

She says there are penalties of up to $1.1 million for misleading claims and any statement or representation made in the course of business can be subject to action by the ACCC if it is misleading.

“However, this case stands as a warning to businesses that they need to be cautious about all statements in business, not just in advertising,” she says.